You are here: Home>People>Tom Joyce Reminisces 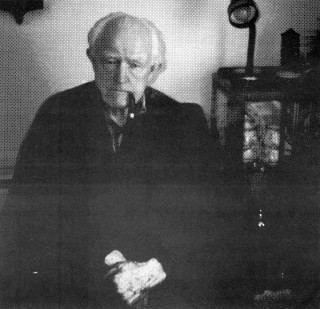 I was born in Knockillaree, close by Aughnanure Castle, in 1912.  I was one of a family of seven, four boys and three girls.  I attended the convent school for one year at five years of age before going on to the “Masters”.  There were boys and girls at the convent but each had their own classroom. The teachers were all nuns but I can’t remember any of their names.

The “Masters” (the boy’s school) was a two-roomed structure with two porches and a door in each. There was a fire place in each room, turf was the fuel burned there. There was one outdoor dry toilet about 30 yards away.  We had several teachers during my time there: Moroney, Murphy, Heffernan, Gibbons, Dunne, Connolly, Cooney, finally Gerard Lee. Some of them retired and others just moved elsewhere.  We always had a principal and an assistant.  There was a ‘slapper’, of course, but some used it more than others!  I was never worried about the ‘slapper’ as lessons were not a problem for me. Some of the boyos were only too familiar with it! It might seem a little strange to say there was never much mitching in my day.  My older brother mitched once and was caught!  I never mitched, I am proud to say.  I had finished my schooling at the age of 13.

Priests of the Parish

Fr. Craddock was the P.P. and Fr. Kelly the curate in my young days. Once at the “stations” in Ardnasillagh when Fr Kelly was giving his sermon he gave out to the parents for not putting their sons forward as mass servers.  But my father, who was cranky enough at times, spoke up and said that it was his responsibility to teach them the Latin so that they could become servers.  The Curate didn’t like it one bit to be spoken to in this way. There was a gallery in the old church before it was enlarged, and there were two entrances to it through the towers on either side of the front door.  Only the rich people went up there, the poor were on the ground floor.  One day when Fr. Considine was making his sermon he made some comment. The ‘quality’ in the gallery thought it was intended for the people below, and laughed out loud.  Well, Fr. Considine looked up to them with fire in his eyes and shouted; “Will ye shut up ye flock of roosters”!!  They got such a fright I’d say they never recovered until they died.  By the way, a few of the local boyos used to sit on the bottom steps of the balcony stairs telling yarns while the Mass was going on.  You’d know they were very religious by their behaviour!!

When I was very young I heard my father say, there was an old man named Tom Hackett who couldn’t pay his rent and was evicted by his landlord of sorts, Murphy.  When Fr. Mc Donagh who was P.P. at the time, heard about it he took his curate and old Tom along with him and smashed the lock off the door and sent Tom inside, and said, “Murphy will never see this place again after to day” – and he didn’t.   Shortly afterwards Murphy was afflicted with some disability and had to be linked to Mass and was no longer able to manage on his own.  The Murphy’s were related to Eddie Madden all of them owning lots of property locally including Murphy’s Hotel (now the Lake Hotel), of whom Miss Murphy was the proprietor.  In spite of all the property he owned, Eddie Madden died a beggar. The story is that he gambled it all way on slow horses… Maybe there were a few fast women in the running as well!!

In the early days before there were any vets available in our parish, an occasional farmer was very good at amateur vetting or animal husbandry.  They learned the hard way through experience and were self taught.  Pat Clancy of Portacarron, was a great self taught vet when I was a youngster. He knew exactly what he was capable of doing and never took on a job unless he was experienced in treating it. He used to treat ‘shoulder slip’ in cattle and was very good with lambing sheep as well.  The first vet in Oughterard lived in the Corrib Hotel.  Some of the young vets were not great at their job. They had the theory but lacked experience. One young vet who came to treat a sick lambing sheep said there was nothing more he could do in her case. Pat Clancy was called in and took out a dead lamb and the sheep lived afterwards.

In my prime I was 6feet 41/2 inches tall and I had strong arms and I loved cutting turf with a sleán, even as a teenager.  It was grand standing in your bare feet in the soft bog. It was soothing and cool on your feet, especially if you had corns or callouses.  I remember once finding a wicker-work basket that had butter in it, probably put there hundreds of years before.  The cool bog was a great natural fridge when mechanical fridges were unimaginable to the ordinary house-wife, or indeed to the lady of the big house as well. The basket was made of willow rods and they were preserved as well as the butter.  I started making baskets of all descriptions early in my life. My last pair of donkey baskets was made in1988 for the Oughterard Show as one of the many not so ancient skills and crafts now fast dying out.  I used to thatch houses as well.

I used to look forward to the Oughterard Races which were very exciting and it was great fun watching the horses and ponies galloping over a mile long course.  There were lots of great characters who were horse owners as well: Jack Bolger, Mark Geoghegan, Walter Butler, and P.K. Joyce from Clifden.  I remember Paddy Burke from Magherabeg especially who had a great horse and used to ride her in the races as well. The last time he rode her he was in his late sixties. When the people saw this old man, who was very tall, getting up on his horse, they were frightened he would fall off and kill himself and they were all praying for him. Not alone did he not fall off but he won the race! The people went wild, and some of his own age group took him down of his horse and carried him around the field on their shoulders as they were over the moon at his amazing victory.  He was Jack Fahy’s grandfather and poor Jack was only a child and he began to cry because he thought they were going to take him away altogether.  Burke was also a very charitable man.  I saw him telling John Farrell who looked after the weighing scales in the Square, just out side Tom Mallon’s House, that he would buy any spuds unsold by the poor people, at the market price.

My eldest brother joined the Guards in the early twenties and after a while he was promoted to Sergeant.  Regrettably he was killed in a car accident – he was hit by a car on a bend on the road while out walking. He was still a young man then. Another of my brothers who was older than me immigrated to the USA, and was killed by lightening while swimming, and several others swimming with him also died.  It was a great tragedy that, being very exceptional indeed.

Tom a Man of Many Talents

I worked at all kinds of jobs during my lifetime. I mowed hay with a scythe and did any or every kind of farm work including “breaking in” horses. I did quite a lot of ploughing with a pair of horses that was before tractors began to replace the dependable horse that never let you down while he lived. Yes, I worked in many places in my long lifetime, and had the good health necessary for those heavy jobs. I didn’t take part in sporting activities other than slinging the ½ cwt, occasionally.  I had the strength but somehow lacked the knack of slinging that weight.

I read a lot and was always well informed on world affairs. I liked history a lot, and still keep in touch with happenings around the world.  Here in Ireland at the present time it is all politics! There’s and election soon. I was on the steering committee appointed to draw up the rules and regulations for electing a Community Council in the 70’s.

“I have a nickname too; I’m called “The Sheriff”, and have a ‘Badge’ to prove it! But that’s another story….”