You are here: Home>People>Oughterard's Famous Connections 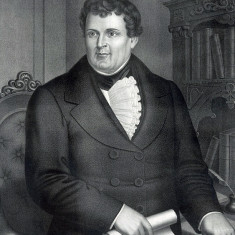 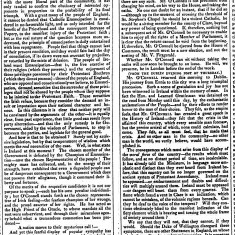 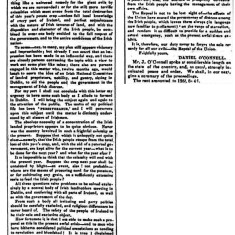 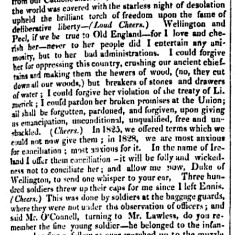 Daniel O’Connell who was born in Cahirciveen but brought up in Derrynane born in 1775 died in Geno Italy 1847 his heart is buried in Rome and his body in Glasnevin, he was the founder of Glasnevin Cemetary, which was called prospect in those days. There was a row about a new entrance and O’Connell sorted it out and the story goes that O’Connell could drive a coach and four through any wall. His main meeting on Catholic  emancipation was held in Phoenix Park and it was said that nearly a million attended and that everyone could hear him. Emancipation came into law on 23rd June 1839.

The Martins and the O’Flahertys had a dispute over the title of our Catholic church when the Martin Estate went into liquidation and the site passed to the law life insurance company, the Martins had not given proper title of the site to the church authorities, they were ordered to quit but Dr Kirwan petitioned Daniel O’Connell to mediate the dispute and he made it a national issue and the Lord Mayor of Dublin was one of the many important people who signed a petition against O’Flaherty who eventually relented and gave over the site. O’Connell’s service was sought because his daughter was married in Oughterard to Mr Nicolas J French a magistrate. O’Connell arrived in Oughterard in 1835 and within two days the case was settled out of court and the contract for the building of the church was given to William Brady of Nuns Island Galway, the Bishop of Galway, Dr Plunkett Brown dedicated the church on the 24th of August 1837 and Dr McHale of Tuam preached the sermon.

Interesting, relevant newspaper articles with thanks to Jim Fahy