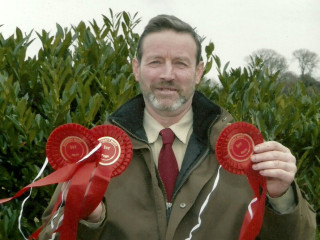 A very dear friend has gone. It is difficult to express fully, my feelings and respect for Eamon.

Though I hadn’t seen him for a few years, we remained in close touch.For all the years I have known him, he was the essence of reliability, for when I lived near him in Magheramore there wouldn’t be many days without him calling to discuss some problem or an article he had read, a technical query affecting his stock or land, or something he had read that could affect my vegetable growing; or when he could come and help me or some of my friends.

I could, and did recommend his ability to turn up and help anywhere, no vague promise, just reliable and of course, his ability to work never failed him.

But it wasn’t the work aspect that I valued in Eamon so highly, it was the character of the man, which incidentally is in all the Connolly family.

A shy man, but if he gave you his confidences you would never abuse them or treat them lightly, because I felt he didn’t air his problems/ confidences, call them whatever they were, lightly, in like manner he would treat your problems, carefully and thoughtfully.

His sense of humour was delightful well thought out, never vicious, a good sign of a thinking man. Yesterday I became aware of Rita’s age. Now that was a surprise and makes the loss of Eamon even sharper, where is the justice of hurting her like this, as Eamon had been such a very good son for such a while.

Now Maureen has shouldered the load and I think the whole Connolly family, yes going back to Eamon’s father are like rocks a very good lot, a privilege to know them all.