John Purcell (1814-1857) was born in 1814 in Kilcommon, near Oughterard, County Galway, Ireland. Little is known about Purcell’s life except for his service in the 9th Lancers (later Queen’s Royal Lancers) during the Indian Mutiny, though sadly, he would not survive the conflict. 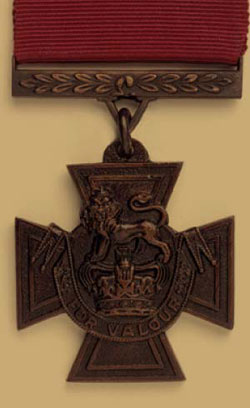 The “Delhi Spearmen” as the 9th Lancers, were known, were heavily involved in the Siege of Delhi. On the 19th June 1857, the guns were reclaimed, though a waggon of Major Scott’s battery was blown up. Brigadier J.H. Grant CB was under threat in the midst of the fighting, and his horse was shot out from under him. Three men, a Sowar and two Privates of the 9th Lancers, Purcell and Thomas Hancock, came to his aid, and the Sowar’s horse was used to get the Brigadier off the field. Purcell’s horse was shot out from under him, and Hancock was severely wounded and would later lose an arm and be invalided back to England.

Purcell sadly didn’t live long enough to know he had been awarded the Victoria Cross or receive it. He was killed in action in Delhi, exactly two months after his VC action on 19th September 1857. Purcell and Hancock were jointly gazetted for the VC following a recommendation by Brigadier Grant on 15th January 1858. Purcell’s medal was sent by registered post to the Commanding Officer of the 9th Lancers on 28th February 1859, to be then presented to Purcell’s brother, James.

Purcell was buried in an unmarked grave in Old Delhi Military Cemetery following his death in action. His medals are in private ownership.