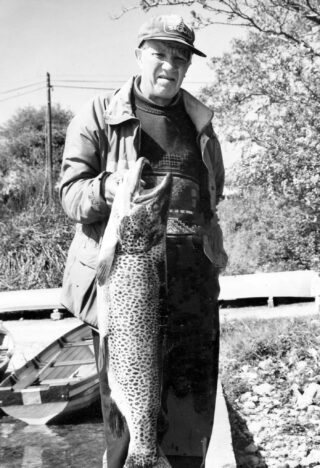 Paddy with a 15lb trout caught in his punt 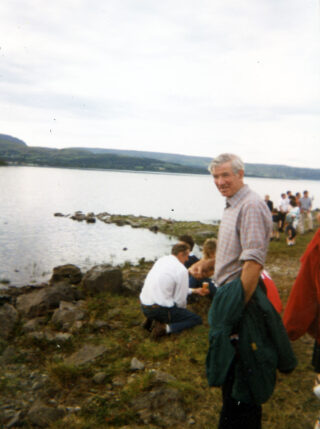 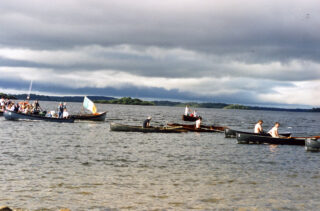 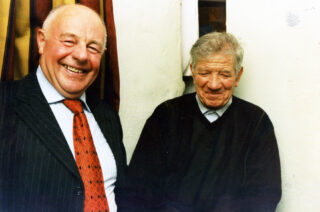 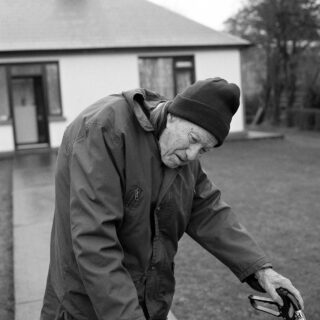 Paddy was born on the 7th of November 1937, the first child of James Kelly and Mary Faherty. Eight more siblings would follow, born in a few different homes locally from Glann to Tullyvrick to Camp Street to Derrylaura and then finally to Baurisheen: five girls and four boys, Paddy, Nancy, Julia, Margie, John, Nora, Jimmy, Noel and Sheila. Sheila was the only one born in a hospital.

It’s worth remembering that when Paddy was born, Ireland wasn’t long independent from the old Empire next door, and its second constitution, the one we still use, was brought in before he was two months old. Rural electrification was still a decade away, and a certain Adolf was in charge in Germany, with the emergency – i.e. World War Two – starting before Paddy was himself two. It was a place in some ways unrecognizable from now.

Paddy went to school until he was fourteen, again very close to here, where the new primary school stands. They would walk, partly on the road, then cutting across the fields. In summer they wore no shoes, and whenever fresh tar was slopped onto the roads it would stick to their feet and come up between their toes. They moved into the house at the bottom of the winding hill that Paddy would not leave until this morning, in 1962 or 63, a huge leap forward with hot water through taps.

Here in this church, he had his sacraments and Masses, and it really wasn’t far from here that he lived his full 84 years and 9 months. The only hints I’ve heard that Paddy may have left the Galway county boundaries are from possibly landing and the Mayo shore of Lough Corrib in Cong, some rowing adventures also to Mayo,  and perhaps going on a bus to a Rod License march in Athlone in the 1980s.

Paddy worked for a while with the ESB, putting poles down as electricity finally began to reach Oughterard and into the countryside, but in his early twenties he got a job in the forestry, and that’s what he did for the next 35 to 40 years, clearing and planting on the bogs back in Glann and Derroura, sending up spruce trees that you will still see today.

He had a Honda 50 in the 60’s but will be far better known for what came later, his black Suzuki 250 with the windscreen. I can remember it chugging outside the shed as he would get ready to leave. He drove it the same way he lived, steady, reserved. Eoin took it for a spin once and mentioned it’s 5th gear after. What 5th gear? asked Paddy.

Instead of working on the land – Noel reckons he never milked a cow – Paddy found his own interests and stuck with them. He was drawn to athletic efforts early, and drawn to the lake with a passion that never left. He ran, training in the fields in Baurisheen, won the mile race on Ross Sports Day, and would run with the likes of Mick Molloy (who ran the marathon in the 1968 Olympics). He played GAA and was on the Oughterard team with his brother John. Paddy was strong and skilful and the only thing that held him back in football apparently was his lack of temper. In one game he took a punch from Paddy Halloran from Rosscahill, enough to draw blood, but he didn’t react, and it was John, who did have a temper, that took off on his behalf, in pursuit of retribution.

I’ve been asking around in the last few days and still haven’t found anyone who remembers Paddy losing his temper. He wasn’t a man to make enemies, reserved, quiet, but not idle.

Then there was life his life on the water. In a cabinet in the front room of the house in Baurisheen there’s a plaque and a medal, side-by-side, both won for rowing. One is dated 1962, and the other 2009. That’s 47 years between them. Paddy was winning in the double scullion in Collinamuck in his early twenties, and in his late sixties, won at the Oughterard Regatta in his own, perfectly maintained light grey punt, wearing his signature white vest with brown scapular necklace, against men as much as four decades younger than him. He was still rowing in that race when he reached his seventies. In the curragh he rowed from Lough Atalia to Roundstone. He rowed with men like Christy Butler, Tom Molloy and his brother John. In Leitir Móir, they beat the McDonaghs, in Kilkieran they took on the Joyces in a curragh made by Tommy Mallon, in Cleggan, they raced in timber currachs. Mickín Keogh would drive back to the regattas towing the currachs behind his truck.

In the same cabinet with the plaque and metal is a little silver cup. From the front it looks perfect, but if you take it out and turn it around, you’ll notice that most of the back is missing. It has been, like an assortment of other cups and metal items, partially sacrificed in the attempt to make the perfect trout spinner. Paddy spent many hours carefully putting these together, brass, copper, and bright aluminium even, the head and it’s spinning wings, the shaft and hooks beneath. When the fishing season opened each year in mid February there would be a flurry of visits to the house, as his spinners had a high reputation. The perfect one might be out there somewhere.

Paddy also made nets, knot by knot, and middle trolls, and t-oar pins, and footsticks (every year for the regatta he set up each boat beforehand). He made brickeen traps, sharpened saws, fixed various boat parts. All of these take careful, skillful, and patient work. He had the patience for us too, his 31 nieces and nephews. As kids we would regularly show up to harass Noel and Paddy, looking for some tool or other, or to use the bike pump. For some reason we would lose every tool ever brought in our home, but we were much more careful with Paddy’s and returned them. We respected him without thinking about it. Imagine how hard it is to not swear at the gang of us once, over our whole childhoods. More recently the next generation were being introduced to Paddy, and all were welcomed

The biggest user of Paddy’s fish equipment are surely himself.  For years, decades, he would fish, Doorus to Inchagoill to Inishmicatreer. Once with John they caught 33 trout in one day. Definitely no otter board. They had a smaller lighter boat for racing, but it would also fit on the seagull engine and go out gillying with it. Another day, in 2003 Paddy landed a trout, 15 pounds 8 ounces, in the punt behind Roeillaun out towards Illanagabhair. It’s worth imagining that scene, playing such a big fish in such a small nimble boat that he repaired and rowed himself, on a spinner he made himself.

One thing that must have helped Paddy over the years was his fastidious diet and clean eating. He must have been one of Flavahan’s porridge oats, best customers, and made huge meals to fuel the rowing, fishing, fixing and working. Faith too, was an important aspect for him, and the rosaries were a regular fixture at his house.  Nine o’clock, knees on the lino. When his father’s eyesight began to fail Paddy became a carer, and again was patient consistent and steady.

In recent years his days of lean strength began to fade, but his attitude persisted. I doubt he was too impressed with using a walking aid, but when advised to keep up regular exercise with it, he started doing laps of the front path from the door to the gate and back. In rain or shine, multiple times a day, he was out doing a hundred or more of them. If you stopped to say hello you could tell at times, he wanted to get back to finishing his session. Some younger people or recent arrivals might only know Paddy from this, but I’m sure they could tell from that alone, the cut of his character, stubborn, physically spirited, committed to his plans.

He was helped in many ways by many people in these latter days, and those who are part of this should be proud of their efforts; we should recognise that as we recoginise Paddy and his life, none of us are separate from others or immune from the circles of life.

Paddy is at peace now, remember him in his punt, out on the Corrib, guiding it through steep froth-tipped waves on a cool late September afternoon, with the bells and the tip of the homemade wooden rod just about to ring and sing the signal of the bite of a trout.