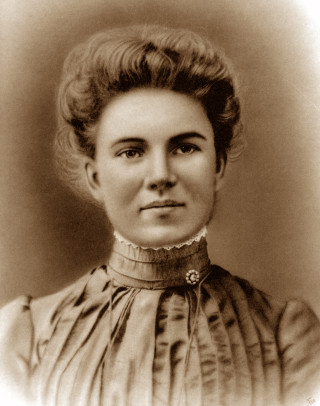 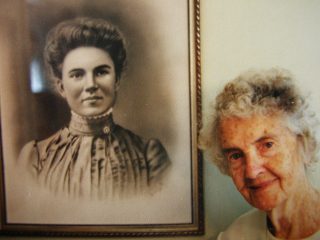 From small beginnings great businesses often develop. And so it was in the case of Brigid O Connor, nee Fahy, affectionately known as “Mod” – an endearing term for mother. Mod was born on the 28th of July 1879 into a large family of sixteen children. Her father John Fahy was married twice. John, a native of Gortacarnaun married Mary Carter. They had five children and with Winifred Walsh his second wife he had eleven children. Mod was a child of this marriage. Mod went to school in Tullykyne.

Mod left her native Gortacarnaun at a young age and went to Boston. Her brother Mike sent her, her ‘passage money’ of £3. She spent ten years happily working for the affluent Knight family of Dorchester, Boston. Mod was treated with great respect and was valued for the excellent service she provided. She returned to Ireland and met her future husband Laurence O Connor from Oakfield, Killannin. They decided to marry within two years and Mod returned to Boston to “fill her trunk”.

After her marriage, which took place on the 19th of August 1906 in Killannin Church, she went to live with her in-laws at Oakfield.

Mod was a hard worker. She worked in the bog, in the fields sowing potatoes, turnips and other vegetables. She walked over the rocky outcrop of rock to Mass in Killannin and Collinamuck. Laurence secured a job as a gate-keeper on the Galway/Dublin Railway line. They lived for a brief period in the gate-keeper’s cottage at Oranmore. Mod was afraid that their first child Mary would be killed on the busy railway line so they moved back to Oughterard and took up residence in a small house where the Tourist Office is to day. Later they moved to a house in Camp Street where Paddy and Una O Halloran live to day. Laurence was a land steward earning £1 a week for John Pervis O FFlahertie of Lemonfield. It was in the small house in Camp Street that Laurence killed and butchered his first sheep and Mod sold the meat.  It was this small beginning that laid the foundation for the future O’Connor Butcher Shop, Camp St. now occupied by another famous butcher Eamon Mc Geough and his son James.

Mod built up a steady trade selling meat in this place and when the R.I.C. Barracks, a substantial building directly across the road from her became vacant Mod and Laurence decided to buy the Barracks. John H. Joyce a great friend of Mod and Laurence encouraged them to borrow the necessary £300 – the purchase cost of the Barracks. Mod and Laurence moved to the larger premises and extended their business.

Mod worked hard butchering meat until her 90th year. She was a very beautiful stylish woman of slim build with dainty feet, a petite 5foot 2inches in height.   While Mod was slight in stature she had tremendous strength and used a meat cleaver with great dexterity and accuracy.  She was a renowned businesswoman, generous, kind and caring who treated her customers fairly and justly always. She kept her house and her butcher shop spotlessly clean.

Mod and Laurence reared a large family – Mary Elizabeth who is now 102 and lives in Boston, Laurence, Winifred, Johnny, Tom, Julie, Jim and Nicholas who died at birth. Winifred married Eddie Faherty. They lived with Mu

od and Laurence, who was known as ‘Da’, for a number of years.  Mary, Padraic and Lal were born in the Barracks building. Padraic has many happy memories of his home in the old Barracks.  Padraic and his friends loved to play in a dark spooky windowless lock up area where prisoners were kept over night. From his bedroom window he had an uninterrupted view across the lake to the island of Inishshambo and on a still summer’s evening he would hear the haunting call of the corncrake in Colman De Lapp’s meadow, now site of Abhainn Ruibhe housing estate as well as the hum of a Seagull boat engine driven by the island’s caretaker making his way after a few pints across to the island.

Mod and Da vacated the barracks in 1953 and went to live with their daughter Winifred and her husband Eddie who built a bungalow in Camp St. In later years Padraic’s mother did not enjoy good health and it was Mod who rose every morning and got the family ready for school or work. The day started with a bowl of porridge topped with a fine helping of cream. Mod was both mother and grandmother to the family. Mod, who enjoyed splendid health, continued to work everyday in the shop and kept the business going until her son Tom got married and took over the butcher shop. Long after the O’Connor had left the business behind the older people referred to the shop as “Larry Connors”

In times past there were many more great businesswomen in Oughterard who worked hard to build up their respective businesses. As the old Irish saying states:

Since the article was written Mary Elizabeth Higgins, eldest daughter of Mod O Connor died on the 15th of February, 102 years old, in Quincy Boston. Mary was born on October 18th 1907. She immigrated to Boston in 1923 when she was 18. She married Malachy Higgins, a native of Tuam, Co. Galway some seven years her senior, a handsome Irish athlete who captained the Galway football in Boston. They were married in June 1931. They honeymooned in Ireland and stayed there for one year before returning to Boston before the birth of their first son. They settled in Boston and Malachy managed  “The Fields Corner Bar and Grill.” Mary Elizabeth and Malachy reared eight sons. Mary was an active member of St Peter’s Parish Church.

Seven of mary’s eight sons now live in the Boston area, and one lives in California.

All her life Mary worked hard, devoted her life to the welfare of her family neighbours and friends.

P.S. A special thank you to Padraic Faherty who shared his memories of his Grandmother Mod O Connor with me.

2021 – Many Thanks to Michael J Caulfield Pennsylvania for sending the beautiful photo of the late Mary O’Connor-Higgins with the portrait of her mother, taken in 2004.