You are here: Home>People>American Newspaper Clippings>Boston Pilot - Religious conversions but with Oughterard connection 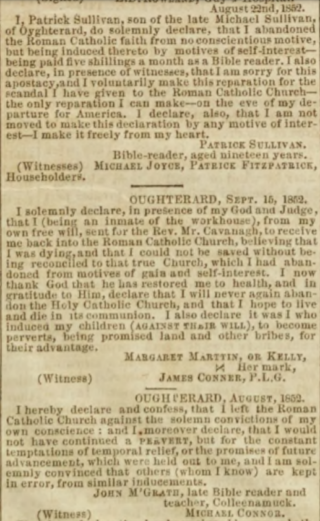 EIGHTH LETTER OF THE REV. DR. CAHILL. TO HIS EXCELLENCY THE EARL OF CARLISLE.

OUGHTERARD, Sept. 15, 1852. I solemnly declare, in presence of my God and Judge, that I (being an inmate of the workhouse), from my own free will, sent for the Rev. Mr. Cavanagh, to receive me hack into the Roman Catholic Church, believing that 1 was dying,and that I could not be saved without being reconciled to that true Church, which I had abandoned from motives of gain and self-interest. I now thank God that he has restored me to health, and in gratitude to Him, declare that I will never again abandon the Holy Catholic Church, and that I hope to live and die in its communion. I also declare it was I who induced my children (against their will), to become perverts, being promised land and other bribes, for their advantage. Margaret Marttin, or Kelly, X Her mark, (Witness) James Conner, P.L.G.

OUGHTERARD), August, 1852. I hereby declare and confess, that I left the Roman Catholic Church against the solemn convictions of my own conscience : and I.moreover declare, that I would not have continued a PERVERT, but for the constant temptations of temporal relief, or the promises of future advancement, which were held out to me, and I am solemnly convinced that others (whom I know) are kept in error, from similar inducements. John M’Grath, late Bible reader and teacher, Colleenamuck. (Witness) Michael Connor. The above declaration has been signed by several others, whose names are too numerous for publication. The day is fast approaching when Ireland will be rid of the shameful iniquity revealed in the foregoing declarations : and that day will be the dawn of anew era of national peace and prosperity. The celebrated Mr, Curran,in reviewing the persecutions inflicted.on Ireland for her invincible fidelity to her ancient creed, used to exclaim that “Without the advice of “the Priesthood it would b e impossible for a “ Catholic and an Irishman to be loyal to t[u: “ English throne lt is quite true, we have been always too faithful: and we have been ever paid back by insult, exclusion, banishment, and death. I have the honor to be, my Lord, your Excellency’s obedient servant,,