You are here: Home>People>Bernie Walsh - Musician 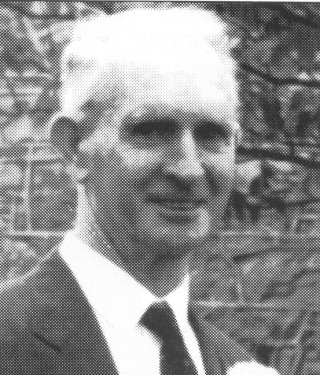 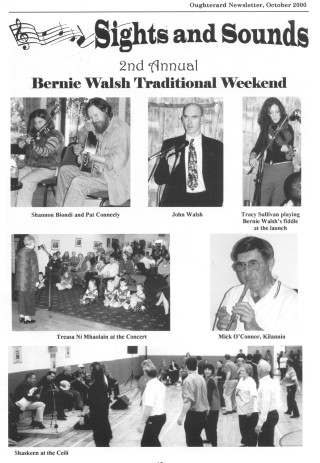 Bernie Walsh was born on September 9th 1925 in Camp Street. The house on the corner as you head out the Glann Road is occupied by his sister in law Kitty Walsh who was married to his brother Mike Walsh R.I.P., her daughter Clare and her husband Leo.  There were four girls and two boys in Bernie’s family. The four girls are Mary Rose Lane, Craughwell, Tessie Owens, Ferbane, Myra Conneely, Rusheeny and Delia D’Arcy, Lemonfield.  It was a music house as their father Johnny Bartley Walsh played the melodeon and to a lesser extent the fiddle, tin whistle and the dew harp.

Bernie’s first musical instrument was the comb and paper. His grand aunt, Margaret Geoghegan, home on holiday from the States, heard him playing the comb and asked if she bought a fiddle would he learn to play.  The ¾ size fiddle was bought. At this time Bernie was around ten years old and his brother Mike two years older.

They were both sent to music lessons with Gerard Lee, a teacher in the local boy’s school.  Mike studied the notes and followed the rules.  Bernie preferred to play by ear and moved on a little quicker.  The teacher and pupil fell out and Bernie was advised to find another pastime.  He practiced a lot in his room without any light and often in the cowshed.

Camp Street had other musicians such as Jack Kinnevey, Paddy Geraghty and Martin Joe Connor.  Other local musicians included Ted Mc Gauley, Patrick Roland, Jack Mullins, Matt and Pete Conneely. They all swapped tunes and learned from one another and were engaged at house parties, dances, goings-away, and comings home around the neighbouring areas.

Bernie turned his hand to most jobs but was a carpenter by trade having learned from his father Johnny Bartley, a qualified carpenter himself.  During the war years Bernie worked on the “Beet” in Lutton, England – a common journey for lots of Irish lads at the time. He returned home a few years later.

He moved to Coolagh, Moycullen to live with and help out his cousins the Noones.  Mick O Connor, John D’Arcy and his daughter Annie were musicians from that area that Bernie played with them. In the early 1950’s Ciarán Mac Mathúna recorded his programme his “Job of Journey Work” – traditional music programme from the Angler’s Hotel in Oughterard. Gerard Lee inquired as to who the fine fiddle player was and was quickly reminded of the young boy who wanted to play his fiddle music by ear years earlier.

Bernie married Kathleen Lee in 1962.  They reared a family of 9 children – three girls and six boys.

His last group and last tunes were with “Sonas” in the Plough Bar for Martin Nee and his wife Maura. That group included Jim McDonagh and Willie Brennan.

The night was Saturday 3rd October 1998. He arrived home to his wife Kathleen and family, said he did not feel so good and passed away peacefully in her arms. There’s surely some great sessions in Heaven these nights.