You are here: Home>People>Dudley's War 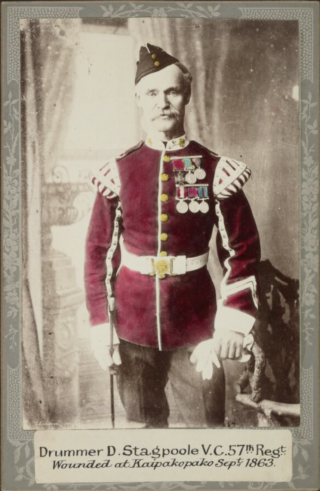 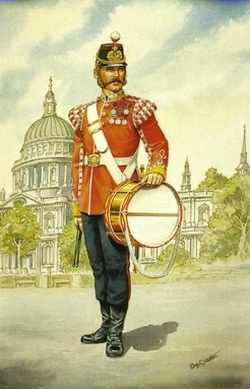 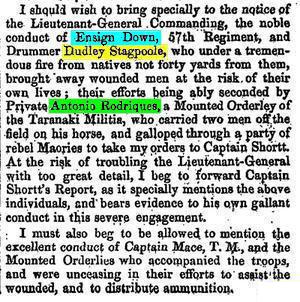 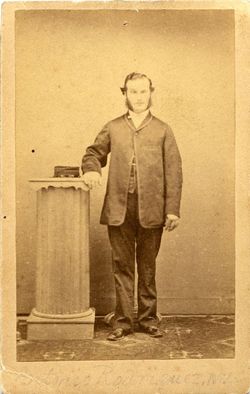 Dudley Stagpoole has the distinction of winning both the Distinguished Conduct Medal and the Victoria Cross within the space of one week during the Taranaki land war in 1863.Dudley wins the Distinguished Conduct Medal
Official reports are not clear as to how Dudley won his DCM. This medal was presented for the energy and devotion displayed at Kaipakopako on 25 September 1863 where Dudley was said to have rescued two injured soldiers. There are no records of injuries to troops on 25 September 1863 though a report by Captain Shortt in the London Gazette 22 December 1863 describes an ambush, early in the morning of September 25, at the Numga-raka (sic), probably Mangaoraka Ford. Shortt states A few minutes after arrival, I observed natives ascending the hill on the other side of the river, who were immediately fired on by the party under Major Butler, and pursued by him. Army dispatches recorded in the London gazette also report that a Maori chief known as Enoka Kingi, was killed (though a local paper of the time reports him being dangerously wounded) and three other warriors severely wounded in skirmishes on or about the 25 September 1863. In articles published in Lloyds News (unknown date) and Chums boys magazine (1908) based on interviews with Dudley later in his life he talks of the action that won him the DCM. Dudley describes waiting in ambush under the command of Major Butler when a soldiers rifle is accidently discharged and the approaching Maori fighters Like a flock of sparrows scattered in all directions. Young Dudley seeing a track leading into the bush runs along it alone and finds himself in close combat with a Maori warrior of rank. After killing or seriously wounding the warrior Dudley hears that Someone else was approaching, and on looking round I saw the Colonel (at that time a Major) on his horse.Well done, Stagpool,” he said; “I have been watching you.” Butler recommended Dudley for the DCM but before a week was up he was involved in another incident that led to the award of the Victoria Cross.Dudley wins the Victoria Cross
The Action at Allen’s hill, (also known as Poutoko) about five and a half miles out of New Plymouth, occurred on October 2 1863 This involved members of the 57th Regiment, the Taranaki Mounted Volunteers and the Taranaki Rifle Volunteers. This incident is better documented but many reports fail to mention the role played by mounted Trooper Antonio Rodrigues de Sardinha. In his interviews Dudley describes being in an advance group of soldiers approaching closely and crossing a fence or hedge towards a Maori taua (a war party of hundreds of warriors) who were besieging St Patricks redoubt. Dudley states that as the group pulled back his right hand man was hit and as I looked behind I saw him lying on the ground with the enemy advancing at full speed. Dudley describes handing his rifle to Sergeant Phelan, then lifting the soldier bodily and putting him back over the fence with the other soldiers. At this point a bullet passed through Dudleys cap and along the side of his skull. The troops were forced to withdraw soon after. Dudley states that Captain Shortt pointed to a wounded man lying some distance beyond the fence and said we must have that man out of it. In Dudleys words I had been out once so I went back a second time. Ensign Down went out with him to rescue the wounded soldier and Trooper Roderigues also rode out and the soldier was carried to safety on his horse. At that moment Dudley was hit again by a bullet that grazed the side of his head leaving a scar. The two wounded men were Henry Cain and Timothy Finn. Finn was the man who fell close to the bush where the Maori fighters were positioned. Unfortunately both he and Cain died of their wounds.

John Thornton Down VC.
Born Fulham, London, England, 2 March 1842 Died Otahuhu, New Zealand 28 April 1866 Ensign John Down won the Victoria Cross in the same action as Dudley Stagpoole. The citation states that his Victoria Cross was bestowed for rescuing “a wounded comrade from the rebel Maories (sic). They succeeded in bringing in the wounded man, who was lying at about fifty yards from the bush, although the enemy kept up a very heavy fire from the bush at short range, and also from behind fallen logs close at hand”. At least one local report describes Ensign Down fending off an armed warrior who burst out of the bushes as the soldiers were attempting to rescue their injured comrade.
Dudley described Ensign Down as a young soldier, recently arrived in the colony, who had tremendous courage and was cool in battle. Both soldiers received their medal on parade in Wanganui
New Zealand in 1864. Sadly, John Thornton Down died of typhoid fever at Otahuhu Camp Auckland, New Zealand in 1866 and never returned home to England. He is buried in the Otahuhu (Holy Trinity) cemetery. He is remembered by a plaque in St Pauls Cathedral erected to officers of the 57th Regiment who died during the New Zealand campaign. Trooper Antonio Rodrigues de Sardinha NZC

Antonio Rodrigues de Sardinha was born in the early 1830s in Madeira, Portugal. He came to New Zealand on the ship St Michael with his older sister Rita Mary and her husband Emmanuel de Castro. The St Michael made two voyages to New Zealand. The second time the ship arrived in New Plymouth on 2 December 1852. Travelling on the same ship was Francis Joseph Mace, also born in Portugal, who later became the well known Captain Frank Mace NZC of The Taranaki Mounted Volunteers. This was a mounted colonial militia involved in the Taranaki land wars. Antonio Rodrigues also became a trooper in the Taranaki Mounted Volunteers. He was awarded the New Zealand Cross, in 1876 ‘for noble and daring conduct during the actions at Allen’s Hill (Poutoko) on October 2 1863 and on 11th March 1864 at Kaitake. On both occasions he was involved in the rescue of injured men under fire and was mentioned by name in British army dispatches. As he was not a member of the British army he could not be considered for the Victoria Cross despite his bravery. The New Zealand Cross is a very rare medal, with only 23 ever being awarded. Antonio Rodrigues de Sardinha married a Miss Rebecca Gough in New Plymouth on 25 August 1864. They had three children, a son and two daughters. In 1865 he was a licensee of the Taranaki hotel in Brougham Street, New Plymouth and later he farmed in the Omata area. Antonio Rodrigues died at home on 12 May 1905, his medal was sold soon after. Currently the medal and citation are held at The Fitzwilliam Museum, Cambridge England.

*Thanks to Gail Lesuma for material pertaining to the Rodrigues family.