You are here: Home>People>Tribute to John Joe Maher R.I.P. 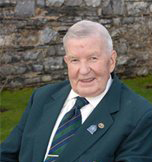 Frank and I were so sorry to learn of John Joe’s death in August 2013. While we knew he wasn’t well yet when death comes knocking it takes us all by surprise. Many memories of times past come flooding back. One always thought that John Joe would always be with us as he was always in control – organising events and golf outings as only he could, paying attention to every little detail. It seemed so effortless to him.

His greatest delight was bringing pleasure to his many friends and acquaintances. He was jovial, generous, upright and honourable. He was truly a man of great integrity, a good man who used his talents wisely for the benefit of his fellow man. The Good Lord will indeed reward him for his goodness.

We in Oughterard Golf Club – in fact in the village of Oughterard are indebted to him as he brought his first group of Fruit Traders here in 1976 and continued to do so well into the 90’s. He put us on the map with other Dublin Clubs and this brought great business to the village. We had some hilarious nights in the Golf Club enjoying barbeques, barn dances, sing songs and dancing into the early hours of the morning. We enjoyed ourselves while John Joe looked on quietly amused at the antics around him. Anyone who knew John Joe and was counted among his friends was privileged. We will miss him.

Death ends a life but relationships live on and for as long as we live John Joe will be part of what we are and we will remember him. The bonds of love can never be broken.

Members of Oughterard Golf Club and Forrest Little, Dublin and his many friends shared many happy experiences and adventures with John Joe and we will carry with us our own individual memories. The late Seamus Heaney, the poet, said, “Memories are the biscuits of life.”

John Joe’s life’s work is now completed and we now pray that the Good Lord will welcome him into his kingdom and reward him for his goodness.