You are here: Home>People>Dick Cotter - RIP 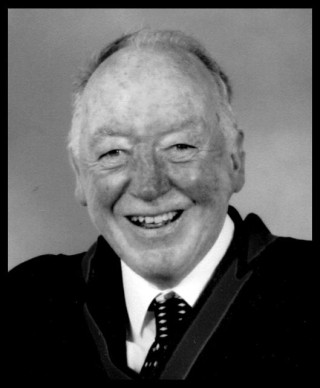 The following eulogy was given at the funeral of  Dr. Dick Cotter on Tuesday, May 15th.)

Dick Cotter was my brother-in-law for forty-nine years. I want to pay him a small tribute before we commit his body to earth. I will do this by reflecting on the junctures at which our paths crossed.

When I received news of Dick’s death last Saturday I wept for him because he had been such an intricate part of the Quinn family for half a century. And then I thought – I have nothing but warm memories of this man. He was such an even-tempered placid man that you never found yourself at cross-purposes with him. There was possibly one exception —in the making of tea. It was, he argued, a ritual and an art.  He would joke that the ritual included stirring the put anti-clockwise. At least I think he was joking.

When Dick married my sister Kay in 1958 I was totally in their debt. They married in November, which meant a whole week home from boarding school for me! I immediately had serious respect for this man. When Olive and I married in 1968 I asked Dick if he could be an usher at the wedding. “You couldn’t have asked a better man,” said Dick. “When it comes to ushing I’m the best!  I could ush for Ireland!” Ironically Dick and Olive shared the same birthday — June 16th — and they would raise a toast to each other each Bloomsday.

A year later Dick and I shared the joy of fatherhood. Lisa Quinn was born in October and Melanie Cotter in November. Dick doted on Melanie, naturally, and subsequently doted on his beautiful grandchildren. But he never stopped doting on his own ‘Katy’.  Never!

There is a whole part of Dick’s life that I cannot address properly — his professional life here in Oughterard. For four decades he ministered to this community, starting many of them out on life’s journey, easing them through that journey, and being with them at journey’s end. These were the days before ‘Doctor on Call’ and ‘West Doc’. The doctor was on call 24-7 and it didn’t matter whether he was on the golf course or watching his beloved Formula One on television. The knock would still come at the door — ‘Would the doctor be about?’  And Kay would tell them to wait in the surgery. The true testament to his service came in the comments of the many people who paid their respects to Dick in the funeral parlour last evening. — “He had such a wonderful way with the children.’  ‘ He was so kind.’  ‘ A pure gentleman.’

He had a way with the animals, too — witness his daily walks with his beloved dogs — first Pepe, then Finn, and currently Rudi, who is at present learning to talk, as it is the only thing he cannot do.  Rudi will miss him.

I saw Dick for the last time in hospital last Tuesday. He was in excellent form and was confident he would be going home next day. But the Lord had other plans and took him to His own home to enjoy his eternal reward. I was in Galway that day doing a writing course with Presentation Convent School students. We were writing Haikus — the three-line poems of five syllables, then seven, syllables, then five again. So to conclude, even though it is impossible to summarise anyone in 17 syllables, this is my Haiku for Dick Cotter —