You are here: Home>People>Michael John Joyce - An Appreciation 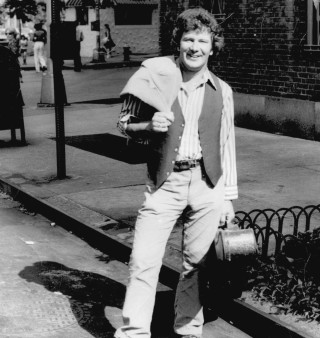 The recent death of Michael John Joyce, Magheramore, Oughterard, was deeply felt across large sectors of the community in Ireland and across the USA.

Singer and comedian Michael John was born on May 9th, 1945 and educated at Naoimh Cuimins Boys School, Oughterard. He always knew he wanted to be a singer/songwriter and he entertained his fellow pupils to the full. When the teacher asked a question or momentarily turned away, Michael John would pull a comical face or give a funny prompt to the poor unfortunate beside him. When the teacher turned again the class would be laughing and Michael John would be sitting there looking quite innocent.

After winning a talent competition as a schoolboy his career took off, and he worked in clubs and dance halls throughout Ireland. It was during this time he was nicknamed Elvis and the name stuck.

He first went to the United States in 1966 and played in nightclubs, ballrooms and hotels in Boston, Cape Cod, New York, Chicago, New Hampshire, Connecticut, Vermont, Maine etc. The Americans gave him another nickname, ‘The Roving Galwayman’, and in the US he entertained all nationalities and played benefit gigs for senior citizens and the handicapped. He also entertained many well-known figures and wined and dined with them. He had photos to prove it including one snapped in Cape Cod with Ted Kennedy and members of his family.

When asked a few years ago about the highlight of his career Michael John said there were two, both of which he was equally proud. The first was the recording and release of his three albums, Travelling Irish Lad, Lonely and You Don’t Love Me Anymore. The second was his being conferred with the Freedom of the City of New Britain in Connecticut in 1978 when he was presented with a scroll to that effect and the ‘key of the city gates’.

After many years of travelling and singing throughout America Michael John returned to Oughterard to live with his parents in their ageing years. He was able to enjoy his life, always having the time to chat and share a joke or two with all he met. He worked proudly at his home, garden and Connemara ponies and shared great times with all while fishing on the Corrib and playing cards.

Mike continued to entertain, sometimes with other musicians, with special memories of great times with Freddy Tuck RIP, and he will always be remembered for his singing on St. Patrick’s Day at Oughterard’s first parade and winning first prize on the Corrib Hotel Float.

Over the years he revisited friends and relatives in America and was recently reunited with his girlfriend Susie after 25 years. This made him very happy (his own words) but it was abruptly ended by his sudden death. Michael John passed away on May 22nd, 2005 just two weeks after his sixtieth birthday. The large crowds who attended his removal and funeral mass gave a true indication of how well respected he was, not just by the Oughterard community but American and Irish friends and fans alike. He will be remembered as a dedicated entertainer with a strong voice and an ability to establish instant rapport with an audience. His repertoire of traditional Irish folk songs was endless as is his legacy. Long live Elvis.