You are here: Home>People>Claude Albert Chavasse 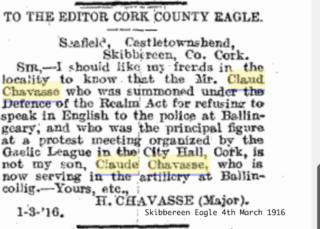 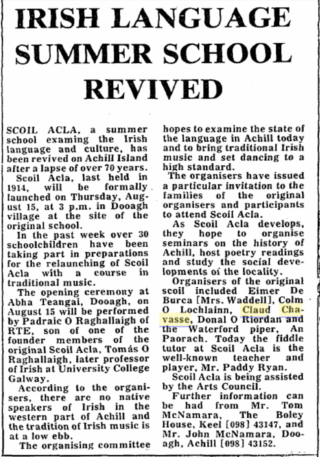 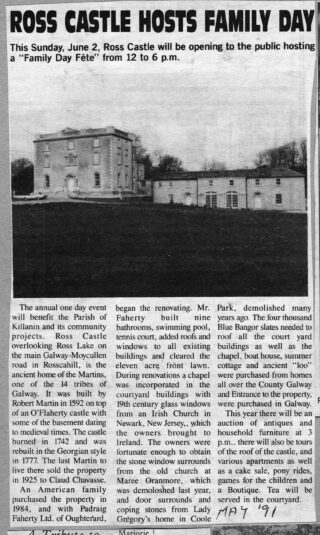 ‘An Englishman masquerading as an Irishman’. This is how the Nationalist and Leinster Times reporter described May 13, 1916 of Cluad de Ceabhasa when he was arrested in Portlaoise . The police thought he was involved with Sinn Féin – he had a small return and no English would be spoken to them.

Ceabhasa is a French surname. Clyde’s father, Albert Sydney Chavasse , lived in Oxford. He was a Professor of Classical Languages ​​and a Sage of the University College. He qualified as a barrister as far back as 1869 and did the legal work of the college entirely free of charge. Cluad was born in Oxford on 2 April 1886 and his birth certificate shows that his family lived at 48 High Street, St Peter in the East, Oxford . His mother, Florence Isabella Manni , was of German descent . He first heard of the Irish language when he was eight years old. His father was friendly with political leaders and around the time Parnell died Irish affairs were discussed at home.

He got to know students from Scotland when he went to university and visited the Isle of Lewis with them during the holidays and studied Gaelic and music. It was there that he first began to wear the small fold, a habit he had practiced all his life.

At Oxford he was inspired by Sir John Rhys (1883–1915), a Celtic scholar. And Diarmuid Trinseach , Éamon Cuirtéis , Robert Barton and a good number of them were in university at the time. They set up an Irish society to discuss Irish affairs and to practice the Irish language. He knew many languages ​​leaving Oxford for him, Latin and Greek no doubt, and the Romance and Celtic languages.

Sometime between 1905 and 1910 he first visited Ireland. He published an essay entitled ‘The People of Hungary ‘ in the Midland Tribune in October 1909 and it was worth copying The Sword of Light on 6 November. After visiting the Gaeltacht he was competent enough in the language to set his mind on only speaking it in the future. If he got tough he would be attracted to French. He raised money for the League on the Isle of Skye in Scotland in July 1911 and was sent to Kilchrist, Aqueduct (Oxford), in The Sword of Light 2 March 1912. His sister Marguerite attended Achill Schoolthat year and was the most notable for the establishment of a knitting industry in the Narrows . Through her friendship with the Trenches she managed to persuade Switzer ‘s Dublin shop to sell Achill’s knitting products . Cluad was also at that School ( idem 1 March 1913) and helped to organize it.

He was fined £ 5 or imprisoned in Ballingeary for failing to speak English to police. The case is reported at length in An Claidheamh Soluis 19 February 1916. Cluad was in the Girls’ School on 2 February when he was approached by Sergeant Appleby (or Beuley as he was called Cluad). Neither he nor any of the other three policemen in the village spoke Irish. Cluad spent two nights in Macroom prison . Business Committee sent Cathal de Paor[under POWER, Jennie Wyse ,] down to defend him in court Feb. 16 when he was charged under the Defense of the Realm Act . ‘The accused man is a nephew of the Protestant bishop ofLimerick , ‘the report states. ‘He is a man of splendid physique and wore a picturesque costume of the Gael.’ The other biographical information given was that Cluad was from Midhurst, Oxfordshire and that his father was a well-known lawyer. It is common to say that he was a nephew of the Bishop of Liverpool, although it is difficult to find any confirmation that he was related to either of them.

On 20 February there were general meetings in Ballingeary and Cork city. Cluad spoke both places and was exceptionally happy to say a little in English in the city. ‘He protested against being described as an Englishman. It was true he was born in Oxford, but by descent he was a Gael, and he had never desired or claimed to be an Englishman. He had made up his mind on that point when he was a small boy, twenty years ago. He had been learning and speaking Irish for eleven years’. That meeting was held in City Hall and a resolution was passed calling on the Municipality to grant him the freedom of the city. It was one of the great adventures of the time and he put the name of Clyde in the mouths of the Contractors. He visited the Keating Branch at the end of February to give an account of his tour of Ireland and how he had succeeded each time he was met by lawmakers.The trial was reviewed in early April in Macroom . The magistrates did not agree at the end of the day but Judge Ó hEidhin said that he would not allow anyone who spoke English to speak Irish in court. Cluad and Cathal had the opportunity to challenge him but said nothing, despite the Business Committee advising them to speak Irish ( An Claidheamh Soluis 8 April 1916).

One of his first attempts at writing Irish was in print in An Claidheamh Soluis 20 October 1917. He was co-secretary with Séamus Mac Artúir of the Galway Branch of the Conradh about that time while living in Cnoc na City . He was elected one of the vice-presidents of the Ring on 16 April 1925.

Examples of its subtlety are remembered in the context of language. He was generous with his cigarettes when he was in captivity but you had to ask for one in Irish. To avoid English he had an Irish name for every place and person: ‘Uiscefort’ on Oxford, ‘Cnoc an Teampaill’ on Winston Churchill. No one was allowed English in his house. If the men who were rebuilding his house near Moycullen needed a break , after the great fire that had taken place there, they only had to draw down an Irish grammar point in front of Clyde.

He spent about sixty-five years in Ireland and was involved in the freedom movement, republicanism and Conradh na Gaeilge throughout that time. Colm Ó Gaora in Mise has an account of when Cluad was helping him to teach fitness through Irish to the Volunteers in Clifden. They were unable to make any sense of the Reverse arms command and Cluad consulted with one of the police! He spent some time in captivity under the British and Free State governments. It is said that Breandán Ó Beacháin founded the character ‘Monsewer’ in An Giall .

As far back as 1921 he won Oireachtas prizes for historical essays, and featured in Courage , The Seeder , The Ring of the Day . Under the pen name ‘Uí Máine’ he wrote essays in Irish Freedom . He was a scholar. The subjects he studied studied ancient and prehistory. It is said that the dot of the Two Patrick was of interest to him long before Thomas Rathile . But his reputation as a scholar was waning, which did not enhance his reputation as a scholar. He believed in reincarnation, for example, and that in ancient times he was a Gael himself, a Red Indian for some time.

It was at Munster College that he first met his wife Móirín Fox. Here is the notice was the sword Soluis October 21, 1916: “Resolved affinity between Móirín not foxes, College Cory , recently of Mount Temple, Terenure , and Cluad to Ceabhasa, BE, Kilchreest, Uiscephort and Achill School ‘. They married on 21 April 1917 in St. Anne’s Church, Dawson Street, Dublin , with the special permission of the Archbishop of Dublin. Conall Cearnach [ Feardorcha Ó Conaill ] officiated the ceremony. Were Douglas Hyde and Joseph Maunsell Hone stood Cluad and was relying MóirínNeilí Ní Bhriain , Eibhlín Ní Ógáin ( Ella Young ), and Mairéad and Sadhbh Trinseach .

Móirín (Olive Agnes Fox) was born in Pinner, Middlesex. Her father Henry Fox was an attorney. Her family came from the rugged parts of Scotland and were associated with Ireland. According to the posthumous account in the Irish Times 11 May 1972 she was a direct descendant of William Smith O’Brien . Her aunt was married to Count von Zeppelin, a pioneer of aircraft. In 1907 she came to Ireland. She converted to Roman Catholicism in 1935. She wrote: Terence MacSwiney , 1961 under the name Móirín Chavasse – she was friendly with the Sweeneys for half a century; Liadain and Curithir , 1917; Midhir and Etain , 1920; The firebringers , 1920, play;From the book of Cáit Ní Dhuibhir , gd, poems; The one unfaithfulness of Naoise , 1930, a long poem; The fall of the year , 1940 which contains many of her verse plays and poems. It is said that she also wrote a three-part play in Irish.

They lived first near Galway and then at Ross House in Rosscahill near Oughterard . Violet Martin (‘Martin Ross’ in the Somerville and Ross partnership) lived there. A stair railing made of wooden beams from an Army ship was lost in a fire. A daughter, Aebhgréine , was born to Cluad and Móirín on 19 December 1920 in Dublin . Cluad converted to Roman Catholicism shortly before his death in hospital on 1 August 1971 and is buried in Kilcummin Cemetery, Oughterard . Móirín died on 8 May 1972.

Under the title ‘Paediatrics Expert’, Francis McGuinness describes his relationship with Cluad in Anois 16 March 1986. Accounts were published in Scéala Éireann 7 August 1971 by Micheál Ó Flannagáin and Criostóir Mac Aonghusa. Christopher said: ‘From a young age he wanted to do his best for the people of Ireland, and to support Irish manufactures, Irish culture, Irish minds, his purpose. God promised him a long life. He spent three scores and five years in this country and, for all that time, he did not receive even a penny of the country ‘s money. Christopher used to urge him to write straightforward prose in Irish instead of long, complicated sentences but he would not take his advice. Another reason, perhaps, was that he published little of the result of his research. Undoubtedly, he was not willing to write any English.

The attached newspaper clippings were source by The Oughterard Heritage Group