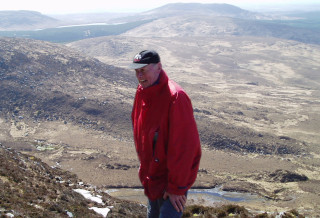 Mother Teresa of Calcutta said that the fruit of faith is love and the fruit of love is service. Roland was a respected member of our community and made a valuable contribution to several groups within the community.  He never sat on the sideline but always tried to improve the lives of his fellow man.   Roland was a wonderful neighbour – always willing to give a helping hand. He worked tirelessly in a quiet efficient manner. He was courteous kind and caring.

He was a dedicated member of the church choir. He loved music and enjoyed playing the mouth organ.  He was a regular visitor every Saturday night to the Corrib Hotel to listen to his favourite group ‘Ardvarna’.  He brought the group to Heidelberg where they entertained his friends at different venues.

He was a committed and dedicated member of the Oughterard Community Centre Committee. He was involved in the extension of the gym and in drawing up a Safety Policy for the staff and general public using the Community Centre.  He was obliging and through in every aspect of his work with the center. The members are indebted and grateful to Roland for the many hours of voluntary work he gave towards the development of the Centre.

Roland loved all sports but he had a particular interest in the marathon and triathlons. He was involved in the Community Games organization and trained young athletes. He was a firm believer in fitness for all.

Roland was a founding member of the Corrib Ramblers’ Group. He was our friend, our leader and above all our inspiration.  He enriched our lives. He opened a whole new world to us when he introduced us to the delights of his native country Germany and particularly to his beloved Heidelberg. We travelled through the Black Forest, Bavaria, Munich, Salzburg, along the Danube as far a field as Vienna in Austria with him.

We shared many hilarious moments with him. He was always so caring, so sincere and obliging. He was protective towards us – he fathered us, scolded us when we stepped out of line, treated us all fairly and equally. We felt secure in his care, we trusted and respected him and above all we loved him.

Death ends a life but relationships live on. Memories will always endure and the bonds of love can never be broken.  Roland will always be part of the Corrib Ramblers and we will remember him.  Ní bhéidh a leithéid ann arís

How did Roland come to Ireland?

Roland’s father who fought in the Second World War 1914-1918 was killed in action during the last week of the war. His mother was ill at the time and found it difficult to rear two children – Roland and his sister. Roland was an altar boy in his local church and the priest asked him if he would like to go to Ireland. The Red Cross had a programme in Ireland where German children were taken into foster care with Irish families in order to give their parents a chance to recover from the effects of the war.  Roland was anxious to come to Ireland and his mother agreed to let him come.

A farmer and his wife who lived in a village outside Listowel in Co.Kerry fostered Roland.  Another boy about the same age accompanied him. They both attended the local primary school and they helped on the farm in the evening and the weekends as the couple had no children. He stayed with the family for about two years and he really enjoyed his time in Kerry.

He found it very strange when he returned to Germany as things had changed so much in such a short time. He even found it strange speaking German as he had become accustomed to speaking English. His time in Kerry introduced him to the Kerry “wit” which he enjoyed.  He had a particular fondness for the writings of John B Keane. He referred to himself as “The German Paddy”.

Later in life he returned to Listowel but to his dismay the schoolhouse, and the farmstead were in ruins. He visited the local pub and there by chance he met a man who had been in school with him. Roland was so pleased when the man recognized him from childhood and even remembered his name.

Roland received an engineering qualification in Frankfurt.  He was employed by the world organization BASS in Germany. He spent two years in Shanghai in China working with BASS before retiring to Ireland.

Mike and Deirdre Webb met Roland by chance on St Patrick’s Day in Germany in 1992. This chance encounter initiated his first participation in the Dublin Marathon in 1992. Roland visited Ireland frequently after this and finally took up permanent residence in Oughterard. Roland is sadly missed.