This bust of Alexander Nimmo is the only likeness of him recorded and was done by his friend John B Jones in 1845. It is in the Royal Dublin Society.

Nimmo was a very private individual and little is known of his life outside of engineering. He lived for some time in Maam Valley, building a house by the Bealanabrack River a few miles north of Maam Cross (the house, known as Corrib Lodge, survives today as Keane¹s Bar). The house was on the carriage road that he later built from Maam Cross to Leenane.

Nimmo was on good terms with the landed families in Connemara such as the Martins of Ballinahinch and the Blakes of Renvyle. There is even the report that he instructed the young Mary Martin, heiress at Ballinahinch, in a course of engineering. Was she the first female engineer trained in County Galway. Nimmo also maintained a residence in Dublin, possibly to facilitate his practice in England and the rest of Ireland. He was to die in Dublin in 1832 at the age of 49.

While his engineering monuments, such as piers and bridges, still exist in many parts of Ireland, it is for his tremendous contribution to the development of the Connemara infrastructure that he is best remembered.

Nimmo was born in Kircaldy, Scotland in 1783. He was a brilliant student and attended universities in Edinburgh and St. Andrews. He soon came to the attention of Thomas Telford, one of the leading civil engineers at the start of the 19th century and under his guidance, he gained experience in surveying and other aspects of building. In 1810, Nimmo moved to Ireland to investigate the practicality of draining and cultivating some of the bogs of Ireland. 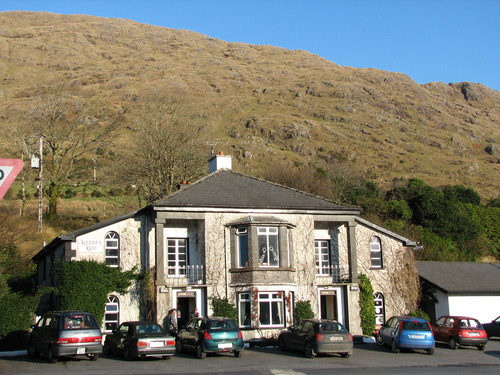 Nimmo worked in Kerry for two years before moving to Connemara early in 1813. Thus began his great love affair with this most remarkable region of this country. The Bogs Commission completed their work in 1814 and Nimmo devoted the next few years to study and private practice. In 1820, Nimmo was appointed as engineer by the Commission for Irish Fisheries a role that possibly merged with that of engineer to the western district. He immediately set about some of the schemes that he had probably been considering since his first stay in Connemara several years earlier. Some of the more notable projects include the building of many piers around the Galway coastline, the founding of the village of Roundstone and the development of the carriage road from Oughterard to Clifden. Much of the work was motivated by his desire to improve the prosperity of the Connemara region and its people and open up the area to transport and communication.