You are here: Home>People>Rev. Alexander Dallas 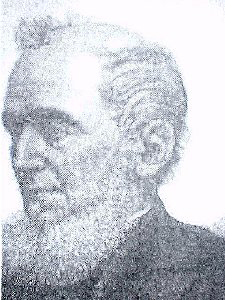 Visitors to the area at this time reported that the land was ‘one vast waste’, and the suffering of the people beyond description.  The plight of the people was most desperate during the spring of 1847.  The relief works were coming to an end and the outdoor relief of the Government had not been implemented.  The only hope for the hundreds of thousands without food was the relief provided by the Society of Friends which was administered by local relief committees. The lives of the great mass of people depended on receiving soup at this time.  The spring of 1847 was also a key period in the history of the militant Protestant missionary societies.  In this region Alexander R.C. Dallas began to organize what became know as  The Irish Church Missions .

Who was Reverend Alexander Dallas?

Alexander Dallas was rector of Worston, a village in Hampshire about 10 miles north of Winchester.  He began to develop an intense interest in Ireland between 1849-1869, as a fruitful ground for missionary work. Dallas, whose family lived in Jamaica, was born in 1791.  He served briefly in the army and was at the Battle of Waterloo.  He retired as a captain and was ordained as a minister in 1821, and began an active life as a ‘single-minded’ missionary.  Although he was buried at Wanston there are memorials commemorating his Irish involvement in St. Patrick’s Cathedral, Dublin and the Mission Church, Townsend Street, Dublin and in the Protestant Church, Clifden.

As part of his preparation in the “Standard” of London, 9th January 1847, Dallas appealed for £ 20,000 to support his missionary work among the Irish people.  It must be stated that Dallas’ proselytizing movement was organized and financed from England. The English Bible societies were its main supporters. It was not part of the general Church of Ireland policy at the time.  People in authority in the Established Church advised Dallas that ‘ open aggression’ would accomplish nothing but he chose to ignore this advice.  The Irish Societies, that represented the Established Protestant Church, task was a simple one – to bring the Bible in Irish to the people in the hope that with its help they would find their own way in the Christian faith.  They were sure that once people could read the Bible in Irish its power was such that it would ‘steadfastly root out prejudice, bigotry, and intolerance, substituting truth, love, mercy, tenderness, forbearance and long suffering”.

Dallas’s organization – ‘The Irish Mission”, showed little enthusiasm for the gentle work of the Irish Society.  Dallas felt that it was his duty to bring the English Evangelical version of the Christian faith to a ‘ rude uncivilized race, totally uneducated and without the means of acquiring instruction’. The Catholic Archbishop of  Tuam, Dr. Mc Hale was opposed to the establishing of National Schools and this held up the progress of education. In this area Dallas found sympathetic Protestant landlords and clergy who invited him to commence work among the people by setting up mission establishments.  Through his friends, who included Arthur Guinness he was introduced to Captain Blake of Drumsnauv, who moved there permanently around 1842 with his wife, on his retirement from the army.

School and Church at the Hill of Doon.

Captain Blake lived at Doon Cottage which was previously a  hunting lodge but Captain Blake  renovated it to a dwelling house, and his wife set up school there.  By October 1846 she was regularly teaching 18-24 children in their sitting room.  She invited Rev. Edwin Moore, rector of Cong to travel there to preach, and he did so fortnightly.  The Blakes then built a small school nearby.The school received support from the “The Church Education Society”  of the Church of Ireland, presumably through the good offices of  Rev. Moore.  Dallas was particularly impressed by Mrs. Blake’s efforts, and offered further support to the school which now consisted of a large room and a dwelling for the master and mistress. In 1848 a building for the rectory began, and quarrying of stone for the building of a church commenced.  Although this first initiative was small in scale, it acquired great significance.  It was in fact the first mission station of the Rev. R.C. Alexander Dallas.