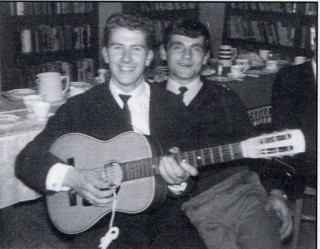 When the subject arose of ‘what we wanted to be when we grew up’ most of us changed our minds from year to year, but one lad who didn’t was Michael John Joyce (MJ). He was to be a singer/entertainer and no doubt about it!

For practising his entertainment skills he used his fellow pupils to the full. When the teacher would ask a question or look away for an instant MJ would pull a comical face or give a wrong/funny/ridiculous prompt to the poor unfortunate beside him. When the teacher would look again, you would be laughing  and MJ would be sitting there looking quite innocent! Next you’d hear ‘Come up you fool’ what were you laughing at? Nothing Sir. Only a fool laughs at nothing…..Hold it out! Another slap of the Hazel rod to ostensibly aid the learning process.

MJ’s singing debut was in the old “Kirk Hall” at the annual concerts organised by Mick Keogh and others. Later he entered talent competitions in both the Kirk and the Hibernian Hall (Camp St.).  After these performances he was dubbed “Elvis” and the name stuck.

During one of these concerts in 1964 MJ was spotted by Tom and Sheila Morley (who established the Boat Inn) and engaged him to sing in their lounge bar at weekends. This venture proved successful and after playing with the “Royal Chords” in Castlebar for about a year he emigrated to the USA in 1966 to seek his fortune. Whilst in New York he was vocalist with various bands who played in such places as; ‘The Ambassador Club’, ‘Jaeger House’ and The Red Mill’ dance venues.

Next MJ came in touch with band promoter Bill Fuller who engaged him to go on a tour of his dancehalls in Chicago, Boston and New York until St. Patrick’s Day 1967. He played rockaway beach and the Catskill mountains until November 1967 when he came home to help his parents on the family farm.

In 1969 he was asked by Bill Fuller to come out to perform in New York, which he did. Starting on St. Patrick’s Day, he played ‘The Old Sheiling Club’, ‘Danny Boy’, and the ‘Pig ‘N Whistle’ in Manhattan plus ‘Dirty Nelly’s’ in the Bronx.  MJ says that people who heard him perform at one of these concerts put up the money for him to record his first album ‘Travelling Irish Lad’.  Except for one summer season spilt between Hamilton, Bermuda and ‘Centenary Club’, New Hampshire, the next eight seasons were spent in Cape Cod, with the  winter seasons being spent in the Brodie Mountain ski area. He also told me that on some of his Cape Cod gigs he entertained some of the Kennedy’s.  In 1984 as MJ’s parents were now getting on in years he decided to come home for good and take care of them in their declining years.

When asked about the highlights of his career he says there were two, both of which he is equally proud of.

1)   The recording and release of his three albums, ‘Travelling Irish Lad’, ‘Lonely’ and ‘You Don’t Love Me Anymore’.

2)   His being conferred with ‘The Freedom of the City of New Britain’ in Connecticut on the 22nd April 1978 when he was presented with a scroll to that effect and ‘The Key of the City Gates’.