You are here: Home>People>Kathleen recounts a century of memories

Kathleen recounts a century of memories

Taken from the Connacht Tribune 2006 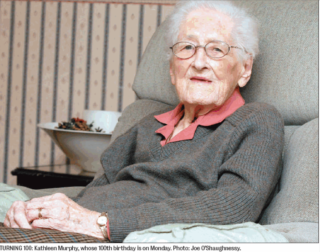 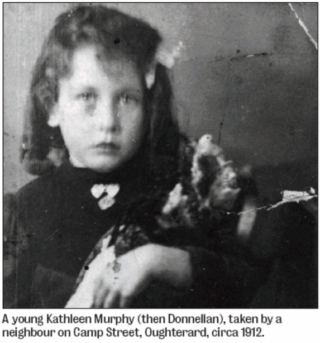 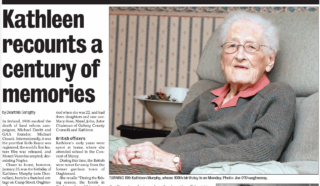 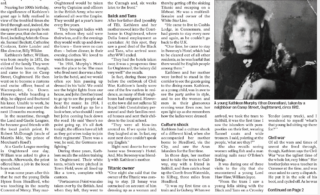 In Ireland, 1906 marked the death of land reform campaigner, Michael Davitt and GAA founder, Michael Cusack. Internationally, it was the year that Rolls Royce was registered, the world’s first feature film was released, and Mount Vesuvius erupted, devastating Naples.

Closer to home, however, January 23,was the birthday of Kathleen Murphy (née Donnellan), born in a thatched cottage on Camp Street, Oughterard.

Nearing her 100th birthday, the significance of Kathleen’s great age is fully realised in view of the troubled times she lived through and, indeed, the many well known people born the same year, that she has outlived, including Aristotle Onassis, Samuel Beckett, Catherine Cookson, Estée Lauder and film director, Billy Wilder.

Kathleen’s father, William, was born nearby in 1851, the eldest of the family. They were evicted from home, though, and came to live on Camp Street, Oughterard. He then went on to become a customs and excise officer, based at Warrenpoint, Co. Down. However, while boarding a ship, he slipped and fractured his knee. Unable to work, he returned home and spent the next 15 months recovering.

In the meantime, through the Land and Gaelic Leagues, he became good friends with the local parish priest, Fr. Robert McDonagh (uncle of Mairtín Mór, ‘the prince of Merchant’s Road’).

At a Gaelic League meeting in Oughterard one day, William was asked to give a speech. Afterwards, the priest offered him a job in the local boys school.

It was some years after this that he met the young Delia Hynes from Headford, who was teaching in the nearby Convent of Mercy. They married when she was 22, and had three daughters and one son: Mary Rose, Maud, John, (later Chairman of Galway County Council) and Kathleen.

Kathleen’s early years were spent at home, where she attended school in the Convent of Mercy.

During this time, the British were never far away from the former garrison town of Oughterard.

She recalls: “During the fishing season, the hotels in Oughterard would be taken over by Captains and officers in the British Army, who were stationed all over the Empire. They would get a year’s leave every five years.

“They brought ladies with them, whom they said were their wives, and in the evenings they would walk up and down the town — there were no cars then — before dinner, in their evening clothes. We loved to watch them pass by.

“In 1914, Murphy’s Hotel was the place to be. The man who lived next door was a butler in the hotel, and we would often see him passing up dressed in his ‘tails’. We could see the bright lights from our house, and John (brother) used to go up to see the people and hear the music. In 1914, I decided I would go up for a look when, who should I meet but John coming back down the road. He said ‘there’s no point going up, it’s all dark tonight, the officers have all left as they got wires today to join their regiments’. There was a war, he said, the Germans are fighting.”

During these years, Kathleen recalls the solders training in Oughterard. Their white tents, which were pitched in Town Field, were all lined up like a town, complete with canteen.

“Portacarron Point was also taken over by the British. And when they left, they went to the Curragh and, six weeks later, to the front.”

After her father died (possibly of TB), Kathleen and her mother moved into the Courthouse in Oughterard, where Delia found employment as caretaker. At this spot, they saw a good deal of the Black and Tans, who arrived soon afterWWI ended.

“They had the hotels taken over, it was a prosperous time for Oughterard; the bakery did very well!” she recalls.

In fact, during those years before the outbreak of Civil War, Kathleen’s family were one of the few natives in residence, as many of their neighbours had emigrated. However, the town did not suffer as 52 Royal Irish Constabulary personnel and their families rented houses and sent their children to the local school.

“They were all blow-ins around us. If we spoke Irish, they laughed at us. In fact, my aunt next door couldn’t speak any English.”

Right next door to her new home was Sweeney’s Hotel. And, Mrs Sweeney was friendly with Kathleen’s mother.

“One night she said that the owner of the Titanic was coming to stay. JB Ismay was ostracised on account of him dressing up as a woman and thereby getting off the sinking Titanic and escaping on a lifeboat. He was a multimillionaire and owner of the White Star Line.

“He came to live in Cashla Lodge, in Connemara, and had guests to stay every now and again, as he couldn’t go back to the U.K.

“One time, he came to stay in Sweeney’s Hotel,which had to be cleared out of all other residents, as he was fearful that there would be English people among them.”

Kathleen and her mother were invited to stand in the corridor to see the guests going to the dining room. Kathleen, as a young child,was in awe to see the party arrive in style, and to see the women and men in their glamorous evening wear. Even now, her eyes light up as she remembers how the ladies were dressed.

Kathleen had a culture shock of a different kind, when she accompanied her mother home to Headford, via the City, and saw the Aran Islanders for the first time.

In those days, her mother used to take the train to Galway, stay with a friend in Salthill, and then catch a boat up the Corrib from Waterside, to Kilbeg, three miles from Headford.

“It was my first time on a train and in Galway. When we arrived, we took the tram to Salthill, it was the first time I saw the islanders with pampooties on their feet, wearing flannel coats and wide trousers. I said, pointing at the people, ‘what are they?’”

It was during one of these visits to the city that she encountered a young Lord Haw Haw, William Joyce.

“From the tram I saw a young fella sitting with the Black and Tans on a Crossley Tender (army truck), and I wondered to myself ‘what’s that young lad sitting up there for?’”

Of all the wars and times of unrest she lived through, though, Kathleen says the Civil War “was the ugliest time of the whole lot, very bitter.” Her brother John was a teacher in Cummer at the time, and was once asked to carry a dispatch. He put it in the sole of his boot, and cycled off. As he was coming into Claregalway, the Free State Army has erected a barricade and were stopping everyone. They brought John into the barracks to be searched. Luckily for him though, there was a man from Oughterard in the army and when he saw John, he told the others that he was okay. If caught, John would have been jailed.

In 1933, Kathleen married a fellow teacher, Tom Murphy, who was actually a friend of John’s. Tom taught in Menlough Boys School, while she replaced Senator Michéal Kitt’s grandmother in a school near Mountbellew. Her job carried the perks of a house and a patch of bog. They had seven children: Maeve Raftery, Woodlawn; Dermot, Dublin; Patricia Dunne, Skerries; Tom, Dublin; Olive, a Mercy nun in California; John in London; and Jane in Loughrea.

Tom died suddenly, though, in 1969. Afterwards Kathleen moved closer to Mountbelllew, where she lived until she moved in with her daughter and son in law, Jane and TJ Beatty, in recent years. She now has 16 grandchildren and seven great grandchildren.

When she turns 100 on Monday, she will be following in the footsteps of her uncle, Jack Donnellan, who also reached this great age, and another uncle, James, who died at aged 97.

Kathleen passed away 24th January 2008 and is buried in the New Cemetery, Bohermore, Galway.

May she rest in peace