You are here: Home>People>Ken Monaghan - A tribute 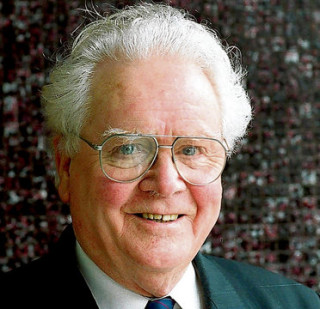 Ken Monaghan, who has died aged 85, was a co-founder of the James Joyce Centre and the last surviving nephew of the writer.  He passionately believed that the life and work of James Joyce should be made accessible to the ordinary reader, to which end he worked tirelessly for a quarter of a century.

It was through the voluntary efforts of Monaghan, his family and others that the 18 th -century townhouse in which the centre is housed was restored to Georgian grandeur and eventually opened to the public in 1994.

He devised popular Joycean walking tours which continue today.  The author of Joyce’s Dublin Family, he spoke at symposiums, seminars and Bloomsday events in Ireland and around the world.  Stephen Joyce, a grandson of James and trustee of the Joyce literary estate, accused him of ‘jumping on the bandwagon’.  Shrugging off the gibe, he carried on as enthusiastically as ever.

A cut above buttermilk

Born in Oughterard, Co Galway, in 1925, he was one of three children of Jack Monaghan, a shopkeeper and his wife Mary Kathleen (May) Joyce. “My mother was not welcomed into this family, who considered themselves to be a “cut above buttermilk.” He wrote. “and no member of it attended the wedding which took place in Dublin”

His father died when he was three and thereafter his mother’s life was a constant struggle, notwithstanding some good neighbours.

Joyce’s reputation in Ireland as the “anti-Christ”

His mother, unlike other of her siblings, was proud of her eldest brother and had copies of Dubliners and A Portrait of the Artist as a Young Man. But she was conscious of Joyce’s reputation in Ireland as the “anti-Christ”, and advised her children that while they should never deny their relationship to him, they should not advertise it either.

Monaghan and his two sisters were educated to secondary level; he went to Terenure College through a trust fund set up by their paternal grandmother.  Attending university was out of the question and he made his career with the Hibernian Bank (later taken over by Bank of Ireland).  After he was married in 1954 his mother joined him and his wife, Joan, at their home in Terenure, where she lived until her death in 1966.

The soul of the James Joyce Centre

When he retired from banking in 1987 he joined the board of directors of the James Joyce Centre.  The centre’s premises at 35 North Great George’s Street had been due for demolition by Dublin City Council, but Senator David Norris successfully opposed the plan.