You are here: Home>Topics>Traditional Market Revived 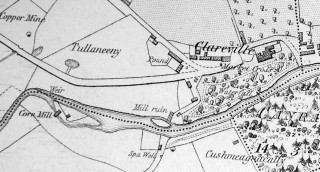 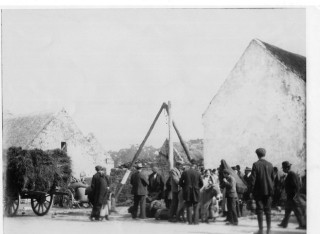 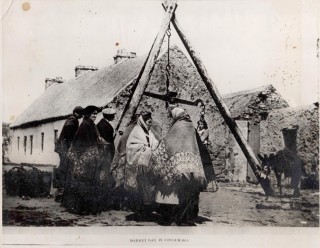 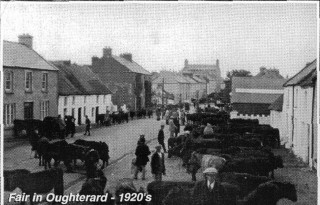 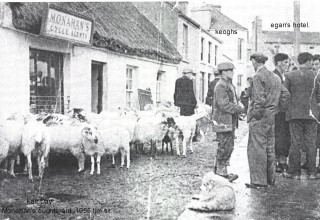 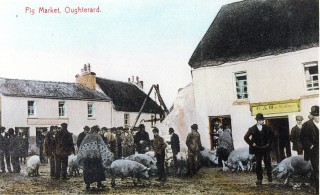 Tuesday May 4th 2010 was an historic day in the life of this idyllic village when the age-old tradition of village markets was revived. In the past, markets were held in every town and village across the country but in 2006 the County Council changed legislation on market towns and now many of these markets no longer exist and many traditions have been lost.

Oughterard owes a great debt of gratitude to the local I.F.A. branch who held a market in the square prior to the County Councils expiry date for such markets and thus retained our right to hold Village Markets in the future.

The first record of fairs and markets that we have goes back to 1698 when the present town evolved from the Manor of Clare (Claremount) built by Nimble Dick Martin. Nimble Dick Martin being Catholic took the side of King James (Jacobites) against  King William of  Orange at the battle of Aughrim in 1691. He was called Nimble Dick, namely for his negotiating skills but also as he was an accomplished duelist.

He persuaded William that he had spared the lives of some Protestant captives during the battle. He also persuaded the Jacobites in Galway city to surrender to William.

As a result he looked for favour from William, asking permission to “establish a manor town at Clare on the Owenriff River”. Here he would attract businessmen and tradesmen who would develop a prosperous community. In July 1698 King William agreed and because it became a Manor of Clare (Claremount) Nimble Dick was allowed to be judge and jury of all his tenants on his 250,000 acre estate. He was allowed to hold courts in Clare and two weekly markets in Claremount plus extra fair days as well as a court of Pye Powder during the fairs.

There had been regular weekly fairs at Claremount before the Manor was established. These would have been organised by the Celtic O fflahertie Clann. The Irish word “Aonach”, means fair or market. It comes from “oenach” which was a regular meeting or assembly of members of a Celtic clan or tuatha (kingdom). At these meetings, traditional games would be played e.g. Hurling, also horse racing and board games. There would be a feast, accompanied by music and story- telling. Like all Celtic Clans the O’fflaherties would have had large herds of cattle. These would have been traded at the Aonach.

While it is possible the O’fflahertie Aonaigh took place near Fough Castle (end of Camp St), they more than likely took place at    Claremount. Looking at the 1842 map you  notice the placename Tullaneeney in Claremount. The original Irish name would be Tullach na hAonaigh (the Hill of the Fair). Also on the same map you’ll notice “Market Cross” & “Pound”. (There was also a Pound at Jimmy Healy’s house in Derrylaura). The “Pound” was for holding cattle for the fair and also for straying animals. The modern “Pound” is on the opposite side of the road. If animals were impounded for straying a farmer had to pay a fee to have them released. The Market Cross would have been where Watson’s garden is today.

The entitlements granted to Nimble Dick were extraordinary for the time as it virtually turned the Martin estate into a petty kingdom and placed a Catholic landlord in a position few Protestants landlords could equal.

Pye Powder Courts were set up in small towns and villages and ports throughout England during Norman and Medieval times to preside over the goings on at fairs, markets and seaports. A Pye Powder Court was responsible for settling disputes on site between buyers and sellers, to make judgments regarding the   quality of goods and to check weights and measures and collect tolls. It was chaired by a man of standing who was called a Steward. In Griffiths Evaluation documents (1855) a  Steward’s house and office is listed and cited above the Waterfall along side Tierney’s corn mill. A fair or market dispute could very quickly turn into a riot or a lynching if there was no official controlling power. Also town and village elders saw no reason why they should not make some tax money from stallholders. Resident villagers and townsfolk were not averse to cheating one another either, and the “Here to day, gone tomorrow” traveling peddlers looked on it as a sort of a sport.

At the end of the car park at the Catholic Church there is the ruin of an old tower. It was probably part of an old fort. Before crossing the toll bridge monies were collected on carts of turf, potatoes, wool and grain going into Oughterard. The Tower was also used as a  sentry post when the courts were in session in St Michaels across the river. The original reason for the courts was one of law and order and for collecting trading tolls.

The big fair was held on the 23rd June, St. John’s night. Jackie Murray’s mother Mary Mc Donagh a native of Rossaveal remembered the fairs at Claremount at the beginning of the 1900s. People travelled from Connemara to it. They kept their animals in “Pounds” and they stayed over night around a huge bonfire that was lit in the shrubbery.

The Weighbridge took pride of place in the square where the Off Licence stands today. It was probably erected around 1870. For many years it provided a useful and essential service, weighing cattle, piglets, oats, potatoes, seeds and goods of all kinds on market day until times and more universal distribution of weighing scales rendered it obsolete. It was demolished and the large iron hook now stands against Paddy Geoghegan’s shed wall in    Canrawer.

We wish all exhibitors in our revived Village Market many happy trading hours.