You are here: Home>Topics>THE PARISH MISSION 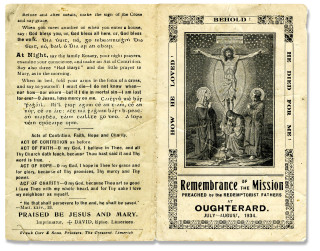 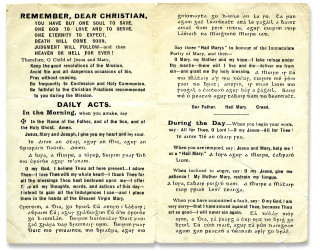 When Padraic Faherty gave me a leaflet he found in his mother’s Winnie prayer book in “Remembrance of the Oughterard Mission,  July-August 1934” led by the Redemptorist it brought back memories of the missions of old.

The parish mission was developed largely by St. Ignatius of Loyola and the Society of Jesus (Jesuits) beginning in the 1590’s. It was a means of educating the people and renewing their faith and counteracting the advance of Protestation. Different orders gave missions around the country. The mission was preached by a team of missionaries under the direction of a superior. Large crowds attended morning mass at 7am in Oughterard. At evening devotions the preacher recited the rosary followed by a sermon which was intended to renew the faithful, to awaken the lax and to revive the weary. The preachers always seemed to be tall strong men in long black flowing soutanes with neat dainty birettas perched on their heads. Around their waist they carried large wooden rosary beads which fell at their sides.

A Great Sense of Occasion

The parish mission and all it entailed was a great sense of occasion every year. It was a time of great excitement. Vivid, soul searing, fire and brimstone tirades on sin, death, judgement and the fires of hell would prepare the way for soothing proclamations of God’s mercy and the reception of the sacraments. The preachers’ thundering voices put the fear of god into us. They came to do the annual spiritual clean-up and they sure did achieve their ambition.   The preacher’s eloquence and passionate description of Our Lord’s Passion and sufferings as He was led through the baying crowds to Calvary brought tears to our eyes. We all wanted to be like Veronica the brave woman who pushed through the mob to wipe the face of Jesus or the strong man Simon who helped to carry the cross.

No one wanted to miss the night the missionaries railed against the sins of the flesh with fire and brimstone when he preached on the 6th and 9th commandments. We pretended through our blushes that we were knowledgeable on all matters pertaining to sex when very often we hadn’t a clue. Men who traded in ‘poitín’ feared the wrath of the missionaries as the railed against the evils of the drink.

Long queues formed for confessions night after night. “What’s he like?”  “What penance did he give?” we asked. My friends and I judged the severity of the penance given to the penitent on the length of time the confessor spent in the confession box. The big clock at the back of the church was our time-keeper as we had no watches back then.

Mission nights also afforded an opportunity to spot the ‘talent’. Women paraded in their new outfits and hats – the wedding outfit often got an airing.  When you purchased new clothes you were expected to wear them going to mass before any other occasion.

The mission in 1934 in Oughterard was held during July and August but people I interviewed remembered them being held during the winter months. They held memories of cycling and walking to the church in the darkness. The lanterns of the stalls in the church yard greeted the parishioners. The stalls did a roaring trade selling holy pictures, holy-water fonts, statues, rosary beads, medals some in cased with relics, green and brown scapulars which we hung around our necks, holy pictures of all the saints – some known to us and other foreign saints like St. Francis of Assisi, Blessed Marin and my own favourite St Jude the patron saint of students and hopeless cases. Mary Gillespie remembers buying several pictures of St. Pregine, the patron saint of those suffering from cancer.

My favourite item in the stalls was a replica of the apparition at Knock Shrine in a small water bowl with imitation snowflakes. When you shook the bowl the snowflakes rose around the statues of St John, Mary and the Lamb of God.

The mission lasted a week. There was a great sense of togetherness in the parish during this period. You made sure to be in time to secure a seat otherwise you were left standing. The men were segregated from the women. The women had their own night and the men their own night. My mother would make sure my Dad’s shoes were shined, the suit brushed and the clean shirt left out for him. He had no excuse but to attend. Women folk hoped the missionaries would reform their men folk! Tall banners, depicting the lives of the various saints, edged with long tassels were placed in brass brackets attached to the side seats along the aisles giving the church a festive look.

Everyone has his own memories of this great annual church occasion. Perhaps you could share them with us!