You are here: Home>Topics>Oughterard Workhouse Crib 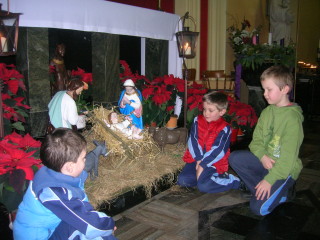 The Oughterard Workhouse was opened in 1852.  George Wilkinson designed it at a cost of £7005 for 600 inmates. The workhouse replaced a “poorhouse” that was burnt down. There were several buildings in the Workhouse including a Fever Hospital, Dead House, Boardroom, homes for the inmates, a Dispensary and a Chapel.

To Build the Pier Road

1927-1928 stones were removed from the dilapidated buildings to build the Pier Road and the new Connemara road that runs through Claremount.

The big bell that hung on the gable wall of the dining room was given to Fr O Dea, parish priest of Camus.  The bell is still in use.

Isadore Darcy, master of the workhouse, gave this crib into the safe keeping of Michael Roland, Main St.