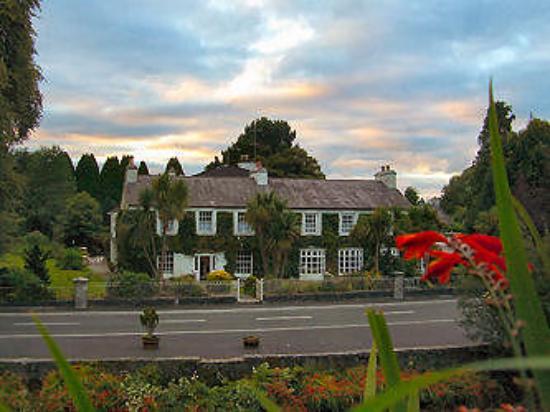 Do you know Oughterard with the stream running through it;
The bridge that falls down on one side like a hill;
The trees and the pleasant, respectable houses;
The white waterfall and the old ruined mill?

God be with the night when I drank there wid Sweeney
Till he brought the “special” from under the floor
And dawn came in square through the bar-parlour window;
And “Jaze us” sez Sweeney “it’s twenty past four!”

In old Oughterard I could get on quite nicely,
For there I know decent, remarkable men;
Jim Sweeney, the sergeant and Fr. Mc Nulty
Who took the first prize with his running dog “Finn”.

Bad cess to the seas and bad cess to the causeways
That keep me from goin’ back homeward once more;
To lean on the bridge and gaze down at the goslings,
And get a “good morrow” from Black Morty Mór.

Oliver St. John Gogarty (1878-1957) was an Irish poet, author, otolaryngologist, athlete, politician, and well-known conversationalist who served as the inspiration for Buck Mulligan in James Joyce’s novel Ulysses (1922). After discovering they shared the same political stance, Gogarty became firm friends with Jim Sweeney of Oughterard. They were both Free Staters and Oliver St. John Gogarty felt safe as a guest in Jim Sweeney’s hotel. They often drank “the special” (poteen) together, sometimes in the company of local characters such as Black Morty Mór.