You are here: Home>Topics>Castle Kirk - Castle of the Hen ( Caislean na Circe) 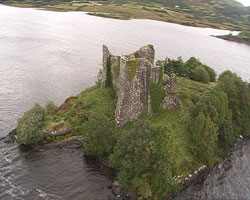 Between Maam and Doon, Lough Orbsen’s (Lough Corrib) deep, sometimes ominous waters flow free from islands except for the rock on which the ancient Hen’s Castle of the O Connor’s and the O Fflahertie’s stands.

The Lord Justice, in 1225, caused Odo O Fflahertie to give up Kirk Castle to Odo O Connor, King of Connacht for assurance of his fidelity.

Castle of the Hen, as Castle Kirk was known, is considered to be the oldest fortress of its kind in Ireland, and it is undoubtly one of the best built.

When first built and well defended, with good food stores, this castle must have been impregnable. The rocks slope abruptly into the water on all sides. It is only accessible in a few places.  The castle is steeped in history and legend.

Mythical Legend of the “Hen”

One such mythical tradition suggests the the O Fflaherties, Gaelic Lords of Connemara, realizing the difficulties of building a large castle in such a place, hired a witch to build it using magic.  In a day and a night of casting spells she succeeded in creating the castle.  She left a magic hen to look after it, warning that as long as the hen was looked after, the castle would remain secure.  Everything went well until severe weather conditions made life difficult and the inhabitants were forced to use up food stores, as it was impossible to go to the mainland for fresh supplies.

With empty bellies, they felt there was no other choice open to them but to eat the hen.

Shortly after this, the Norman knight, de Burgo, laid siege to the castle. The garrison was starved out and the castle demolished.

History states that in Elizabethan times there was a policy of “Divide and Conquer”, which was used effectively throughout the 16th century.  It weakened Gaelic power and the peace in Connacht was broken, as it meant the return of inter tribal warfare, each sept attempting to take advantage of the situation.

Granuaile’s husband, Donal-and Chodaigh, Taniste-elect to the Chieftain, had much to lose as the fight for power erupted among the O Fflahertie Septs. The old customs were under threat.

Donal-and Chodaidh died at the hands of his old enemies, the Joyces, in an attack on Kirk Castle. On account of his courage in defending the castle, they nicknamed him “ Donal and Cullagh, (The Cock). The Joyces descended on “ Cock’s Castle”, they thought it would be a “pushover” but they had not bargained on Granuaile who, with her husband’s clansmen, defended the castle with skill and bravery – so much so that the castle was renamed “ Hen’s Castle”. (Caislean na Circe), the name it has to this day.

In the 19th century this historic ruin was vandalized and hundreds of its stones were removed to build houses in the area. The interior of the Keep is now a mass of stones and weeds, but it is still a very impressive sight.  It is not too hard to visualize what this castle must have looked like hundreds of years ago.