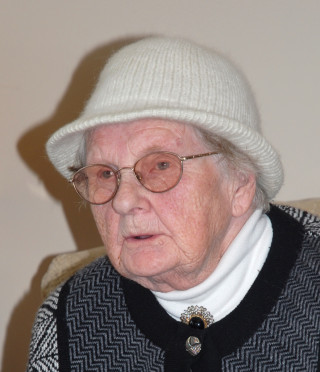 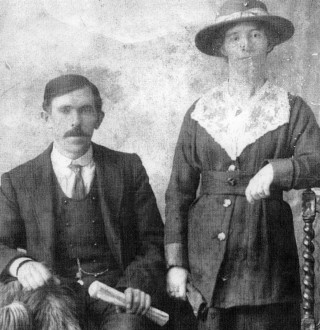 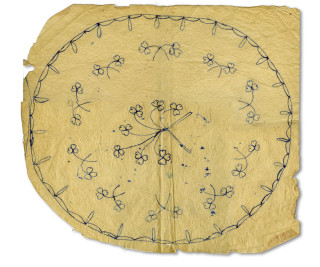 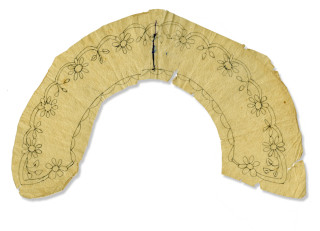 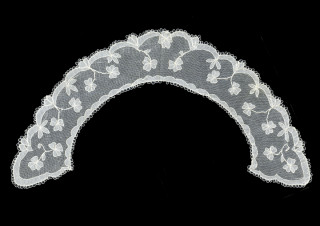 The earliest reference to lace making in Oughterard comes from a letter written in 1907 by a holidaymaker from Dublin named Michael who was visiting his uncle Willie, a guard stationed in the Barracks in Camp Street.

“ Mary Kate and Violet do be sitting on the window sill making lace.  It is very slow and very nice when finished.  They have a little scissors to cut away the top part of the pattern, and the scissors has a blob of steel on one side so that it will not sink into the lace underneath and cut it.  I never saw one like that before. When they have the lace finished they bring it to the Convent and get more patterns and materials. I suppose the nuns sell the lace for them”

Mary Rose (Mamie) Lane nee Walsh born in 1918 and a native of Camp Street in a recent interview confirmed the above statement. Mary Kate Walsh (nee Naughton) was her mother. Mary Kate’s father John Naughton was killed working on the construction of the Galway/Clifden Railway (1898-1935). He was killed before Mary Kate was born and because of this tragedy people believed that Mary Kate was blessed with a “curing gift”. She was said to have a cure for warts and thrush.

The lace Factory was situated where the Industrial School stood at the corner of Main St. and the Station Rd. Working along side Mary Kate Walsh were Mary Ann Faherty, (Patrick Conneely’s grand aunt), Maggie Lee, Maggie Donnellan, (related to Padraic O Domhnailláin), Bridget Maloney, (who lived opposite the Protestant Church), Sarah and Bridget Melia, Porridgetown and Nellie Keane.

Lace making was a tedious task and Mary Kate who was regarded as a recluse worked away by candlelight or beside a tiny window at the gable window of the house – the house on the corner of Camp St. and the Glann Road. The task of rearing the children fell to Mamie’s grandmother, Maria Naughton (nee Geoghegan). Lace making demanded great skill and concentration so children were kept out of the way.  The lace makers made lace for table centres, d’oyleys, handkerchiefs, collars, “jiabots” a piece of lace that hung where the edges of the collar met), small souvenir pieces and veils for communions and weddings. Many pieces of lace were sent to America and England as gifts. Visitors purchased pieces as souvenirs. The shamrock, thistle and rose featured in the designs. During the Tostal 1950 – (Summer festival of celebrations in towns and villages of Ireland to entertain locals and to attract visitors to the country) sales increased

A lace wedding veil for Countess Mc Texas’ daughter was made locally. Mamie and Ima Sullivan (Kieran’s aunt) went into the Protestant Church to see the wedding ceremony. The church authorities at the time didn’t allow Catholics enter the Protestant church. Mamie and Ima were reprimanded and their parents were sent for. Her father spoke with the nuns and prevented the matter being reported to the bishop.

Ann Quinn a native of Sligo was appointed to the Killannin Congested District Board.  She built the house opposite Mc Namara’s shop and set up a knitting business in the house. She sold the lace with her knitting garments for the lace-makers. Mary Conneely and Dell Mc Donagh, Claremount worked for Ann as well as Flosie Dunseath. Ann’s sister, Bridget, wife of Michael O Malley, (shopkeeper, Rosmuc) took over the business when Ann died 1933. Ann died in Rosmuc and was buried in  Oughterard. She was an ardent supporter of the G.A.A and followers of the G.A.A. escorted her remains from the bridge to her place of rest. The building was sold to John Joyces wife’s sister, Miss Begley from Claremorris.

Mary Rose showed us samples of lace made by her mother and she has the special scissors used by her. We in the Culture and Heritage group are deeply indebted to Mary Rose for the trouble she took in coming to speak with us recently.