Memories in the landscape 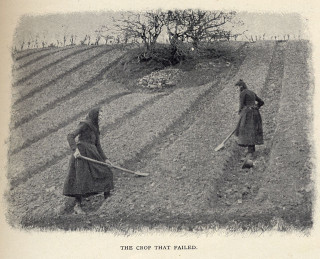 Example of the digging and creation of lazy-beds 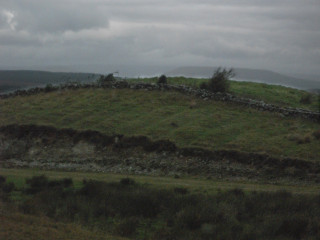 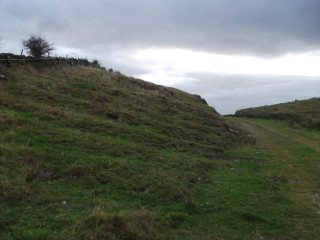 In the 1700s, Ireland’s population increased rapidly. As land became more crowded, many farmers were forced to seek new land for growing food, and the only available areas were the poor quality, barely arable uplands. Unfortunately, the uplands of western Ireland more often than not consisted of thin, poor quality soil. This prompted the invention of ‘lazy beds’ (which are also known as ‘ridge and furrow’), an arable cultivation method which was traditionally used in Ireland for planting the potato.If you look at the upland areas which surround Oughterard today you can often notice a rippled effect in the landscape. These ‘ripples’ are the remains of this long tradition and serve as a reminder of a tragic event in Oughterard’s history: The Great Famine.

Low trenches were dug with spades at about three foot intervals with the extracted sod and dirt piled in between creating the raised beds. The beds were then enriched with some form of fertiliser depending on the resources at hand e.g. manure, rotted straw, sea weed. This method was well suited to locations lacking warmth, deep soil, and drainage; hence, they’re prevalence in the upper boglands of the west. The raised beds are drier and therefore warmer than the moist flat ground around them. The beds warm up more quickly in the morning and retain heat longer. At night they protect crops from frost by draining the denser cold air into the ditches and compared to flat fields. According to both researchers and farmers, lazy beds reduce labor time and raise the yield per acre adding to their importance during these times.

While these earthworks are very common in the area and can be clearly see in Leam, Glann, Clooshgereen, Raha etc one must not confuse natural soil creep with lazy beds. Lazy beds are vertical lines which run down hillsides. Whereas soil creep is the natural sliding of soil down a hillside causing a rippled effect made up of horizontal lines