You are here: Home>Topics>Kilcummin Parish News 2013

Church of the Immaculate Conception 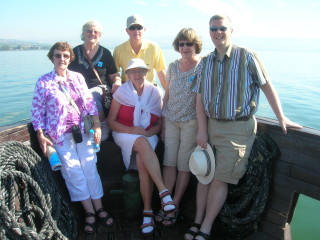 Rev. Fr Alan Burke at the Christmas celebrations thanked the people of the parish for their continued support and assistance in running parish affairs. The parish mission was a success in bringing Christ’s message of peace and love into peoples lives.  From the numbers attending it showed that faith is very alive in our community and, along with our dear friends in the Church of Ireland, we can be proud of witnessing to our Christian heritage in our locality.

Parish Mission:
Historic day for Oughterard with first ever visit from Papal Nuncio.

Oughterard Church embraced a moment of history on Sunday September 30th when archbishop Charles Brown became the first ever Papal Nuncio to visit the parish – as their key-note speaker at their mission.

There was a good attendance for the event as the Nuncio was welcomed by the Rev. Alan Burke ADM. Afterwards he planted a tree in the church grounds as a memento of his visit, and enjoyed a cup of tea along with those attending at a marquee put in place for the duration of the mission.

The Nuncio said the mass as well as preaching the homily. He reminded the congregation that the diocese was Galway, Kilfenora and Kilmacduagh. He pointed out that his great grandmother, Brigid Geoghegan, had been born in an area near to the ancient monastery of Kilmacduagh before immigrating to America as a poor girl of nineteen in search of a new life around 1880.

It was due to her faith that he had eventually inherited his through his grandmother and his mother, and it was symbolic of the ongoing faith of the Irish generally, something they had brought throughout the world. He had been very moved to visit that monastery in Kilmacduagh where his forbears were buried.

He said that being a Catholic was always a struggle: one had to struggle against doubts, and be prepared to be a little brave. If Catholicism was too easy for one, there was something wrong. Faith was in many ways a personal relationship, he added.

The New Yorker, one of a family of six, was formally welcomed before the occasion by the students of St. Paul’s Secondary School. They were later joined by students from the parish’s three National Schools to read Prayers of the Faithful, while wonderful music was provided by the local choir.

Many of those attending were delighted to meet with the Nuncio as tea was drunk in the fine autumnal sunshine. With a public address system put in place for the occasion, Mr. Kevin Blehein bade him a formal welcome, Outlining the Nuncio’s academic qualifications and different roles in the Vatican, before being appointed by Pope Benedict to Ireland on November 26th 2011. “I don’t think it was for a holiday,’ he said.

In fact the Nuncio was considered an unexpected and perhaps inspired choice, by the Pope who had known Archbishop Brown well before he himself was made Pope.

Brendan Ferguson from the Angling Club presented the Nuncio with a fishing rod which he said, ‘only works in the Corrib’!  Student Lisa Gibbons presented him with a piece of Connemara marble, and the Archbishop in turn expressed his gratitude for the gifts.

In September, in conjunction with our Mission “Be Ambassadors of Christ” an Organ recital and Poetry Reading was organized to help us reflect on the beauty and creativity of God revealed through music and poetry. The organist Raymond O’Donnell who has been the director of music at Galway Cathedral since 1994 performed – pieces by Johannes Brahms, Johann Sebastian Bach and Mendelssohn.

The Oughterard Church organ has had a long history as liturgical instrument in Galway’s pro-cathedral, just off Shop Street, before it arrived in its current location in the 1950’s. A happy set of circumstances conspired to ensure that Oughterard received the instrument which is of a very high standard of craftsmanship. The organ built by Evans and Barr and transported to Oughterard by the firm of H. Willis has 19 speaking stops in total divided between two manuals and the pedal board. In addition to these, couplers permit divisions to sound together. The tones created by combining individual stops makes the instrument ideal for use both in sacred liturgy and as a concert instrument when you can hear the full range of its capability.

Parish Pilgrimage to the Holy Land

Fr. Alan with his friend Fr. Conor Cunningham, Lisdoonvarna, led a pilgrimage to the Holy Land visiting Nazareth, Jerusalem, the Via Dolorosa, The Holy Sepulchre, Mount Tabor, Galillee and many other places of interest.

My fellow pilgrims and I gained a profound understanding of our religion through the scripture readings and masses offered by the priests accompanying us.

While the parish has no major current debts its present income is just about keeping pace with expenditure. Perhaps as the economy improves we may be in a better position in 2014 to contribute towards renovations that are necessary for the up keep of the parish church.

During the past year 584 public Masses were celebrated throughout the parish which required 62,000 Holy Communion breads and 37 bottles of altar wine.

Every weekend we printed over 400 Sunday parish newsletters.

22 children were welcomed into the community through Baptism, 34 received their First Holy Communion and 31 celebrated the Sacrament of Confirmation with Bishop Martin Drennan.

14 couples were married during the year.

We returned to God 30 of our beloved dead.

It would be interesting to compare these statistics with those of ten to twenty years ago!