You are here: Home>Topics>Oughterard Connections to Aviva Stadium 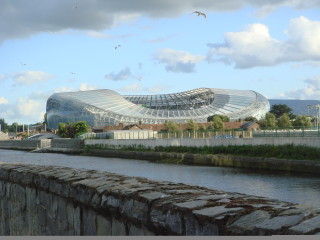 The Lansdowne Road Stadium (now Aviva) is the oldest international rugby ground in the world, home to the Lansdowne Rugby Club, and was opened in 1872.

This famous venue was founded in that year by Henry W. D. Dunlop, a highly accomplished and decorated athlete, and a graduate engineer from Trinity College, Dublin. He originally took a 69 year lease of the ground from the Pembroke Estate and the stadium he developed was named after the nearby road, which in turn was named after William Petty-Fitzmaurice, 1st Marquess of Lansdowne. This venue is steeped in the history of Irish and International rugby football, all of which has been most comprehensively recorded in the book Lansdowne Road by Gerard Siggins & Malachy Clerkin (O’brienPress 2010)

However it is interesting to note that Henry’s son, Canon Douglas Dunlop was the Church of Ireland Rector of Oughterard from 1936 – 1962, and lived at the then rectory which is now part of the Connemara Gateway Hotel. He died in Oughterard in 1967 and is buried in the church grounds. Also buried here is Henry’s grandson Major Denis Dunlop. Another grandson, Eric, by Henry’s second marriage, had always been involved with Lansdowne and was an Honorary Life Member of the Club. He died in 2008 at the age of 96 having seen the original stadium demolished in 2006, over 100 years after its foundation!