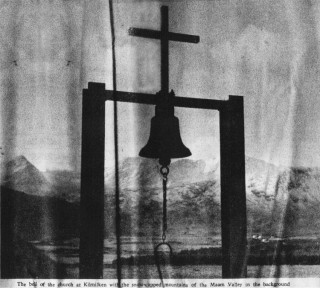 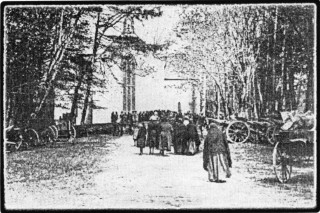 On the morning of April 23rd, 1921 a party of eight members of the Royal Irish Constabulary under the command of District Inspector Sugrue left Oughterard in a lorry at or about the hour of 3.00 a.m. Their mission was to carry out a raid on the home of Padraic O’Malley, Sinn Fein T.D. who resided between Maam and Leenane in a place known as Munterowen. They were joined by six other police members in Maam and continued towards O’Malley’s house on bicycles in order to arrive undetected. As they approached O’Malley’s at about 4.15 a.m. they could see smoke coming from a chimney and shortly afterwards saw men run from nearby buildings.

They then took cover in ditches and behind sod fences. It appears that one of the Oughterard party – Constable John Boylan – fired his revolver. It has been speculated that this was to warn the IRA members who it was believed were in the area. In any event the IRA had detected their approach and had run to their pre-arranged posts in the hills. Following the shot being fired, the IRA members opened fire and kept the police penned down. After about two hours, Constable Boylan, who was sheltering behind a sod fence was shot in the neck and legs and bled to death. Prior to his death he is quoted as having said to his fellow member – Sergeant Gilmartin – “Don’t stir sergeant, I am done for, they have got the range, do whatever you can.”

Francis Joyce from Leenane was taking three men to repair fences in the area, not knowing of the ambush. On seeing his car approach, Constable Rutledge of the Maam police, crawled out of a drain and held him up at rifle point. Constable Rutledge jumped on to the running board of the car and instructed him to get out of the area fast. In the course of escaping, Constable Rutledge was shot in the left arm. Having alerted his headquarters in Galway re-enforcements arrived at 3.30 p.m. By then the IRA members had dispersed.

News of the ambush reached Leenane village and on hearing that men had been injured Father Cunningham, local curate, made his way by car to the ambush site, arriving at 12 noon where he remained until re-enforcements arrived. Due to continued firing by the IRA members he was unable to reach the spot where Constable Boylan lay and remained with Sergeant Hanley who had been shot in the legs.

Later the home of Padraic O’Malley was searched by the Crown Forces. They found the occupants to be, Mrs O’ Malley, wife of Edward O’Malley, a civil engineer, who was a brother of Padraic O’Malley, her two children, an elderly servant and a fifteen year old local girl. They escorted them from the house and having done so, placed explosive charges there and in nearby buildings which they then set off.

Later that evening the body of Constable Boylan was taken to his home in Camp where his five children, all under the age of seven years, were awaiting him. His wife – Mary Anne – had died in Oughterard on November 1st, 1918 from pneumonia – influenza at the age of 27 years. His body lay in his home until the Monday morning. During Sunday many of his friends and residents of the town called to offer their sympathy.

At 12 o’clock on Monday his body was taken directly to Kilcummin cemetery to be buried beside his late wife. The cortege was headed by Divisional Commissioner R.F. Cruise, Chief Inspector Sidley, District Inspectors: McGlynn and Sugrue, Head Constable Casey, ex Head Constable Noonan, ex Sergeant Sweeney followed by fifty members of the RIC and Auxiliary. His children were conveyed in Chief Inspector Sidley’s car. All shops in the town remained closed during the funeral. Religious service was performed by Father Considine C.C. at the graveside, followed by a volley of shots and last post.

Constable John Boylan – Who was he?

Constable John Boylan was born in County Leitrim on December 21st, 1880 and baptised in Ballaghameehan church where his parents: Francis Boylan and Rose MacCabe(McCabe) – were married in September, 1879. He appears to have been reared on a farm in the townland Aghnahana in the District Electoral Division of Glenaniff in the civil parish of Rossinver. He joined the Royal Irish Constabulary in Dublin on May 16th, 1902 having been recommended by District Inspector Maxwell . He was appointed to Kilkenny on December 1st, 1902, to Galway East Riding in 1908 and to Kerry in 1911.

On February 22nd, 1914 while attached to Kenmare station, he married Mary Anne Spillane, daughter of Thomas Spillane, Merchant (Deceased) of Greenane in Templenoe R.C. church. He was posted to Galway West Riding on the 18th June, 1914 and was employed in the office of the District Inspector in Oughterard.

His eldest child – Francis Joseph – was born in Kenmare in 1914. Twin girls: Mary Christina and Rose Patricia were born in Oughterard in 1915, as were Thomas Edward in 1916 and John in 1918. Francis Joseph died in Oughterard on April 9th, 1922 from Diphtheria-Cardiac Failure. His death was notified by his aunt – Mary E. Boylan who was present at death.

District of Clonbur No. 2 in the Union of Oughterard in the County of Galway: 1921, Twenty Third April, Kilmilkin, John Boylan, male, widower, 40 years, Constable R.I.C., Shock and Haemorrhage caused by Gunshot wounds fired by some person or persons unknown with murderous intent. Certificate received from Military Court of Inquiry held 29th April 1921 at Oughterard in the County of Galway. Fifteenth May 1921 – Signature: Registrar