You are here: Home>People>Oughterard Courthouse - A Brief History 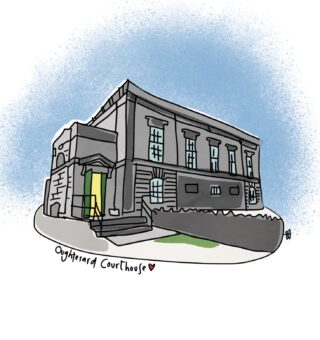 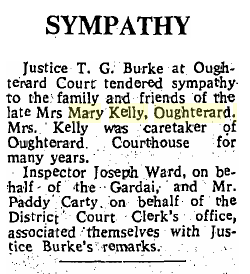 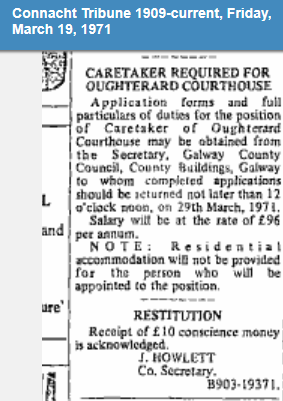 The Courthouse in Oughterard was designed by Dublin born architect William Caldbeck (c1820-1872). During his career he was renowned for designing many courthouses, churches and banks throughout Ireland. Oughterard Courthouse was built in the 1840s and was in use as a District Court and local polling station until 2008 when Judge Mary Fahy decided she could no longer work in such poor conditions; puddles of water on the floor and no heating!

Griffiths Valuation of 1855 lists the Courthouse as being in the Townland of Fough West, the occupier as “The Grand Jury of Galway” and the Lessor was Christopher St George. In 1901 the owner was Col C.P. Doig. Although, in the 1911 census the Courthouse is listed under Cregg Townland, Fough West is more accurate. The owner at this time was not noted.

William J. Donnellan was born in 1851 at the end of Camp Street in the town and he was a teacher and court translator. When he died in 1917 his wife Delia was offered the job of caretaker of the Courthouse. Consequently she moved into the basement with her family of four to begin her new life and work in the Courthouse.

In a newspaper interview with Mary Kenny, Delia’s daughter Kathleen (b.1906), talks about her vivid memories of living in Oughterard. She describes meeting Padraig Pearse and Éamon DeValera who often visited her father and her cousin Padraig O’Donnellain – the famous Irish writer.

While she was living in the Courthouse, Kathleen recalls JB Ismay, the owner of the Titanic, taking over Sweeney’s Hotel (now The Corrib Hotel) for a night to host a party. Her mother Delia was a friend of Mrs Sweeney’s so she and Kathleen were allowed into the hotel to watch the goings-on. Ismay lived at Cashla Lodge at the time and, it seems, the people in Connemara were told that the Germans had sunk the Titanic!

One of Delia’s sons, John, went on to become a Galway county councillor.

Delia remained as caretaker of the Courthouse up until the 1940s. She was often described as “always being dressed in black”. In the mid 1950s Martin and Molly Kelly moved into the Courthouse basement. They had two children Marie and Patrick. Molly took over as caretaker until the 1960s when, sadly, she died suddenly. Her husband, however, stayed on for a few years more as caretaker. The Kellys were the last family to live in the Courthouse.

The basement no longer exists as a space beneath the Courthouse building although the original steps and entrance remain.