You are here: Home>Topics>The Xmas Candle on the Water Tower

The Xmas Candle on the Water Tower 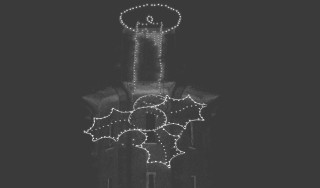 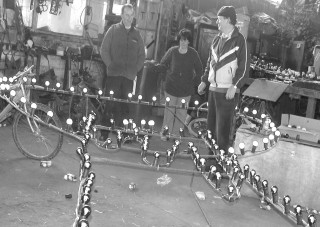 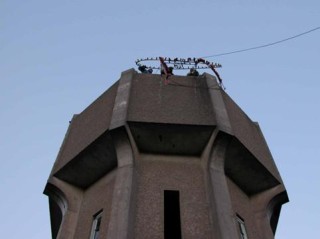 Designed and built by Oughterard people, the Candle was born over a few pints in a certain hostelry in Oughterard and like most things discussed over a few pints the participants thought it would be left there. So it was to Tom Tuck’s amazement when a trailer load of steel arrived into his garage with JT Gibbons and his Design looking for “welders”. No pay involved, just plenty of nights welding, and it had to be done by the shortest day of the year, which was four days ahead. Now many a man would have shrunk under the idea but Tom just scratched his head and said, “no problem.”

JT drew his design on the ground in the garage and the slow process of shaping the holly on the candle began. Word got around and along came Leo Clegget. Pat DeLapp called in with his welder and Sean & John Higgins called to add encouragement.  Seamus Kelly called to lend a hand and many called to see what was happening. The monster was growing….

Would it work???? The candle was welded in two parts, the top part of the candle with the halo around it and the bottom part of it where the holly leaves were. The size was 40 feet from top to bottom and 20 feet wide at the leaves. It used 50yards of rope light along with over 350 bulbs, which had to be painted with special paint for the reds and the greens of the berries and the holly.

Then the time came to test the candle. Yes the first half worked but a lot of the bulbs weren’t lighting. They tested the second half and… Boom! …fused and confused…

Every bulb, every connection, every reconnection had to be checked, so they worked right into the late hours of the night. Bulbs were changed, connections fixed – tiring, tedious, heartbreaking work which was made easier by the number of people who called in for a chat with refreshments (thanks to James Stewart and Tom Tuck ) and encouragement.

The morning came, and with it a load of help. Finally the bulbs were fixed. It looked amazing…. it was huge… Now how to get it to the Water Tower where John Murray had cleared all the furze and briars with the JCB so we could get in and then up on the Water Tower, which is so high. The lorry arrived from Stewarts’ and the first part of the candle was lifted on. The slow process of getting it through the town began. Finally arriving at the Water Tower where it was lifted, ropes attached, the Strong Men Of Oughterard (Christy & Michael Conneely and Pat & Colie De Lapp) sent to the top of the tower where they lifted it up with brute strength and a lot of humour, and a good few prayers. When it was fixed the second half had to be got. The holly leaves were at the widest part so it had to be lifted by hand to adjust for cars and trees the whole way up the town.

But the amazing strength of the Oughterard Men won again…. The second half reached the water tower and John Kelly used his cherry picker to attach it to the top half. It was up…….but did it work??? Eddie Casey did the final fixing and started the Generator. It lit for a minute and then went out…no…the Generator was too small. Undaunted they found a bigger and better one. At about 7.30pm Sean Higgins officially lit the candle and the feeling of pride will never leave anyone of us who saw it lit for the first time! It was just beautiful, and not one bulb had broken on its journey.