You are here: Home>Topics>Oughterard's Thatch Houses 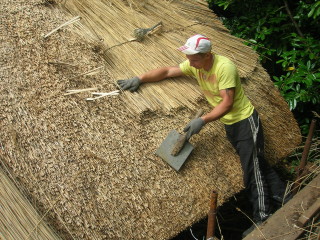 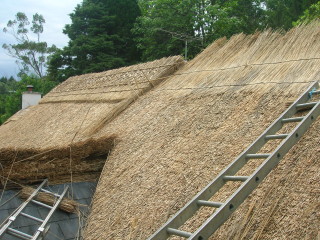 work in progress on the Mayfly Cottage 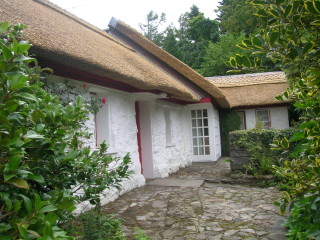 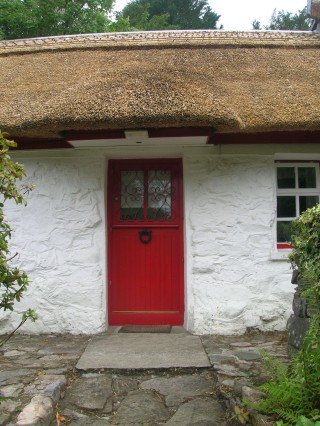 Fronf door of the Mayfly Cottage 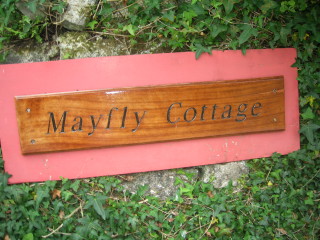 Since I came to live in Oughterard 1967 there has been a reduction in the number of thatch houses. In 2012 I decided to photograph and record the history of the houses using thatch from Maam Cross to Gortreevagh. I was pleasantly surprised to find some fine examples of houses still using thatch.

The decline is mainly due to the expense involved as thatching is labour intensive. It is often difficult to find ‘Thatchers’ – they continue to command respect wherever they ply their trade. Thatch houses are harder to insure because of the perceived risk that a stray spark could set the whole roof on fire.  Birds in the past damaged a roof while they were foraging for grubs and rodents who were attracted by residual grain in the straw.

Tomás O Crohan, who was born and lived his life on the Blasket Islands, Co Kerry, describes other problems which a thatched roof could cause: “ The thatch would have been all right if the hens would only have left it alone, but they wouldn’t.  As soon as the rushes began to decay, and worms could be found in them, a man with a gun couldn’t have kept the hens away from scratching and nesting there. Then the drips would begin, and a dirty drip it was too, for there was too much soot mixed with it. The hens nested so deep in the thatch that the women often lost them, for a hen wouldn’t even answer the call to food when she was broody. The little lasses very often brought a hatful or capful of eggs down from the houses. The children made a mess of the thatch too, always hunting for eggs. It was as good as a day at Puck Fair to listen to two of the women whose houses adjoined, quarrelling with one another about the ownership of the “eggs.”

Modern thatch houses do not have the problems of by gone days. Thatching has evolved into an art form that is appreciated by all, and the Irish thatched cottage has become one of the features of our heritage that is most photographed and most loved. Irish Thatched Cottage Holidays have become popular in recent years as people from Ireland and overseas grasp the opportunity to experience just what it was like to live in a thatched Cottage.

Thatching is the craft of building a roof with dry vegetation such as straw, water reed, sedge, rushes or heather, layering the vegetation so as to shed water away from the inner roof. Most homes in Ireland, in the countryside, towns and villages were thatched up until the 1800’s. From the 19th century onwards because of agricultural recession and rural depopulation the number of thatched cottages declined and the number of “Thatchers.” Later the number of thatched properties increased and was a symbol of wealth rather than poverty – people were interested in preserving historic buildings and using more sustainable building materials.

Structure of the Houses

The thatched rush houses of the 1870’s had two rooms and a loft. Often the gable end faced the road – people were not interested in having a scenic view, their main concern was shelter from the prevailing winds. The site for the house was carefully chosen taking account of the slope of the land, shelter and distance from other dwellings. The size of the cottages varied considerably – they were rectangular structures with thick stone walls mortared with clay or cement. Windows and doors were set in the long side of the house rather than in the gables.

Windows were small and were deeply set in the walls. In the past some cottages had no windows at all as rent was often calculated by the landlords on the basis of the number and size of the windows. In fact small windows with even smaller panes of glass kept the house warm in the winter and pleasantly cool in the summer. Thatch was a natural insulator and air pockets within the straw thatch insulated a building in both warm and cold weather.

Doors were set in the front and back of the house. One remained open by day, both as a means of ventilating the house and as a sign of welcome to callers. The front door was often divided in two horizontally and on windy days only the top half was opened to prevent draughts. The half door was also useful for keeping young children indoors and for preventing farm animals from entering. It also provided a comfortable armrest for the woman of the house when she lent out to chat with the neighbours.

The roof was steeply pitched and its weight borne upon the walls. All cottages had an open hearth at floor level, with a chimney protruding through the roof ridge. The walls were usually covered with white wash which was renewed every year. To keep the roof fully waterproof the thatch had to be repaired each year and whole thatch completely renewed after 7 or 8 years. In the early years it was a reasonably cheap way of roofing a house as the materials used, were available locally.

The work of building a house was carried out in a cheerful atmosphere with neighbours and friends helping each other. When it was completed the owner would invite his helpers and neighbours to a house warming Céili which was an occasion for general celebration.

Different methods of thatching were employed. Before a roof was thatched a thin layer of rough grass or heather sods was fixed over timbers and this formed a sound base for the thatch.

Bespoke for weeks, he turned up some morning

With a light ladder and a bag of knives.

He eyed the old rigging, poked at the eaves.

Next, the bundled rods: hazel and willow

Were flicked for weight, twisted in case they’d snap.

It seemed he spent the morning warming up:

Then fixed the ladder, laid out well honed blades

And snipped at straw and sharpened ends of rods

That, bent in two, made a white-pronged staple

For pinning down his world, handful by handful.

Couchant for days on sods above the rafters

He shaved and flushed the butts, stitched all together

Into a sloped honeycomb, a stubble patch,

And left them gaping at his Midas touch.

Life in the House

Large families were reared in those small cottages and there was food enough – not elaborate – from the land to feed the hungry mouths. The farm grew fine crops of potatoes, turnips, barley and oats. A cow or two provided milk and butter.

Emigration was rife and many emigrated to the United States and England, sending home money to assist their families.

As people became prosperous they abandoned their thatch cottages and with the aid of a grant they built new homes with heavy squared rafters and slates, a spacious palour, kitchen with running water and electricity. The old thatched cottage was often turned into a cowshed.

Whatever the merits or demerits of the thatch cottage they provided homes for large numbers of people over the centuries, and indeed still do. They sit comfortably among their surroundings in a way that their modern counterpart, the bungalow which has spread rapidly in Ireland during the past decades, never will. The cottage was to do with living, and its appearance was determined by the needs of the occupier, while bungalows were built with a jumble of materials and styles with cavalier disregard for the spirit of the place.

Two storey thatch houses in Oughterard lined the lower part of the main street and Camp St with cottages interspersed between the tall buildings. Only two of the original thatch buildings now stand in the village – Powers Pub and Mary Joyce’s former home now owned by Gerry Gibney.

Wafting through the rooms

The part of me

The living that was blended

So I take with me

Past soul of this house,

From “Close to Earth” by Alice Taylor