You are here: Home>Places>Topographical Dictionary of Ireland 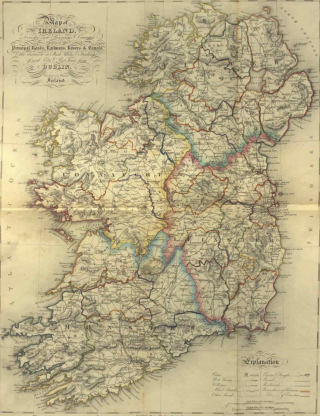 “Oughterard, a village and post-town, in the parish of Kilcummin, barony of Moycullen, county of Galway, and province of Connaught, 131`miles (W.N.W.) from Galway City, and 118 (W. by N.) from Dublin City, on the mail coach road from Galway to Clifden, the population is returned with the parish.

This place is beautifully situated on Lough Corrib and is intersected by a river descending from a neighbouring mountain, which rushing over a mass of rocks above the town, forms a picturesque waterfall. The river appears to have had originally a subterraneous source, the limestone rock projecting over the stream for about 100 yards in length, in the form of a broken arch. The pearl mussel is found in this river in some of which pearls of large size have been found. Here are infantry barracks, at present unoccupied, for 7 officers and 142 non-commissioned officers and privates, with stabling for three horses. A chief constabulary police force, and a party of the revenue police are stationed here.

The town is much frequented by invalids for its chalybeate spa; the well is but indifferently constructed, and little care is taken to secure it from admixture with the water of the mountain stream. About a mile from the town a fine quarry of black marble has been opened within the last few months, and is now worked by the proprietor of the estate, T.B. Martin Esq.; the marble is of the same quality as that of Menlough and Merlin Park; there is another quarry of the same marble in the neighbourhood belonging to T.H. O’Flaherty Esq. About two miles from the town the road to Galway passes over a natural bridge of rocks, and the river flows under the castle of Aughnanure, which is built on a ledge of limestone rock. This castle which is about two miles from the town was anciently a seat of the O’Flaherty family and was at  later period inhabitated by the Earl of Clanricarde; it was a place of great strength. The river flowing under it falls into Lough Corrib.

The parish church, a small neat edifice, and the Roman Catholic chapel, a handsome building with a steeple are situated in the town in which are also the parochial school and dispensary.”