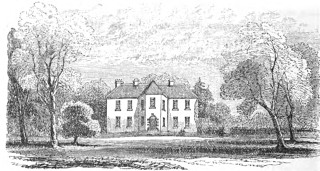 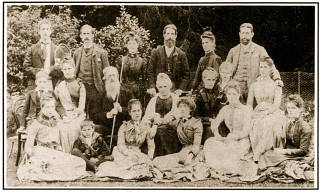 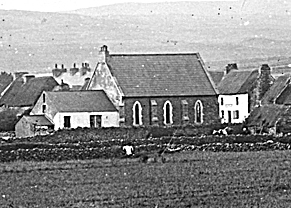 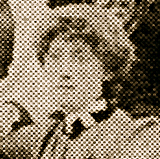 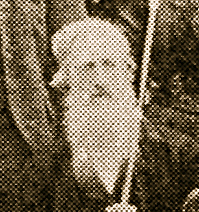 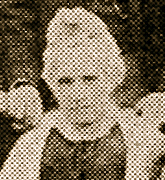 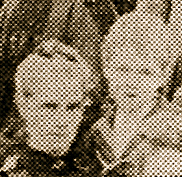 The O’Flaherties of Lemonfield are descended from the O’Flaherties of Aughnenure Castle near Oughterard, county Galway. Their estate was in the parish of Kilcummin, barony of Moycullen, county Galway, and Lemonfield close to the village of Oughterard was their seat from the mid 18th century. There are some 17th and 19th century records relating to them in the Westport Papers.

The O’Flahertie estate of over 4500 acres was advertised for sale in 1854 and a reduced acreage of 2346 acres in 1864. Both rentals included lead mines and a black marble quarry. In the 1870s they owned 2340 acres in county Galway. By March 1916 the O’Flaherties had accepted offers from the Congested Districts’ Board for parts of their estate.

George O’Flahertie was occupying the property at Lemonfield, at the time of Griffith’s Valuation when it was valued at £20.

In Maurice Semple’s book “Reflections on Lough Corrib” there is a photograph from my father’s collection of the Rev. Theobald Richard O’Fflahertie his wife Mary Ann and 14 children.

It struck me that the history of this family might be of some interest. In general, it is rather a sad story.

He had no son

When Thomas Henry O’Fflahertie died in 1823 he had no son to inherit Lemonfield. A nephew was the nearest heir. Thomas was pre-deceased by two brothers. Theobald Richard, son of the elder , was at the time a child of six years. George Fortescue, son of the younger brother was a grown up young man, and it was to him, that Thomas bequeathed the estate; doubtless thinking that it would be better run in the hands of an adult heir. Unfortunately this did not prove to be the case.

George Fortescue always lived extravagantly, lost heavily in a prolonged lawsuit with the first Mr. Hodgson of Currarevagh and left the property heavily mortgaged. His wife Rebecca, was a member of a strict sect known as the Plymouth Brethren and built “The Kirk”which stood on the site of the present Community Hall; and later served as a Parrish hall until destroyed by hurricane Debbie in 1961.

When theobald failed to inherit the estate, his widowed mother, highly indignant, removed herself and her son to England, where he was educated and ordained to the ministry of The Church of England, eventuall becoming the Vicar of Capel in Sussex.

As George Fortescue and Rebecca had no children, Theobald was the acknowledged heir but being settled at Capel, had no intention of taking up residence. Instead his son John {Jack} at the age of eighteen, was sent to learn the management of the estate and in due course, to run it for his father, who after he inherited, made suitable arrangements for the running of his parrish and came over  for a few months every summer with his wife Mary Ann and family.

At this time there was always half a regiment stationed in the Oughterard Barracks and the military played a major part in the social life of the place. At least two of the O’Fflahertie girls had serious romances with officers; but Theobald did not like the army and was a typically strict Victorian parent. “No daughter of mine shall marry a man of blood” was a favorite sayng of his and he was equally critical of other suitors.

As a result only three of his ten daughters married. Mary the eldest married rather late and was early widowed. She lavished her love and her means on Frank; a brilliant but unstable boy, who settled to nothing and ended up in a mental home.

Went to sea at the age of sixteen

Dora, my grandmother, is seated next to Theobald with her two sons. She also lost her husband soon after this photograph was taken. Hugh the elder lad was my father. At the age of sixteen, he went to sea as an apprentice in a sailing ship. He voyaged to South Africa and Australia. He later Joined the P&O Shipping Company. My uncle Willie followed his father into the Indian Medical Srevice.

Edith Married Edgar Ross an engineer employed on the laying of the Galway to Clifden railway line in the 1880s. They had a family of four.

When Theobald died in 1897, the income from his parrish, naturally, died with him. The widow and seven unmarried daughters were left without means, except for a very small private income of Mary Ann’s and the support of brother Jack who had inherited Lemonfield.

In those days there were very few careers open to women – mainly domestic service or nursing, and for the better educated, teaching or a post as a “Ladies companion”.

Some of the sisters tried to start a small school but it was not a great success.

Grace and Emma were the most enterprising. Grace trained as a nurse, seved with the Red Cross all through the 1914 – 1918 war and finally became Matron of Sheringham Hospital in Norfolk.

Emma joined the civil service in 1914, when it first accepted women in order to realease men for the armed forces. She did so well that she was retained permanently and worked on untill of pension age

Accidentally set her clothes on fire

Mary Ann died in 1903 and one daughter, Alice, in 1905. The remaining Four; Barbara, Kathleen, Maud and Jessie continued living together and supported their brother. The oldest three passing away one after the other in the 1920s and 1930s. Jessie the youngest survived untill 1946. She was all her life, handicapped by very bad sight and her death was caused by burns she recieved when she accidentally set fire to her clothes.

Of the four brothers, Jack. who succeeded his father, had also suffered from his strict parental control. In his young days he was prevented from marrying the girl of his choice, so remained single and in his middle age was left alone in Lemonfield to pay off the mortgage and finance his mother and sisters. He was a good and considerate landlord who never left his property.

Frank was always delicate and died in his twenty first year.

George married late and had no family. He inherited the estate on Jack’s death in 1931. He was old, ill, and quite incapable of any sensible management.

As a result the whole place was taken over by the Land Commission as a derelict property and “Striped”. The House was later demolished. There was no male heir of the name left. So ended the Lemonfield branch of the O’Fflahertie Clan