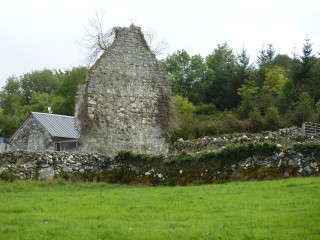 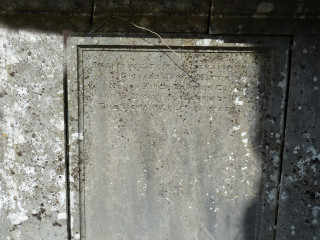 Doone Lodge was situated in the village of Doone North, Doon, Killannin. Only the western gable stands presently. It was built  by the Martin Family of Ross, possibly mid 1700s. It is not known for which member of the family it was built.

A record of land lettings for the Ross Estate by Nicholas Martin, who died in 1811, shows, on the cover “Nicholas Martin- Doone Lodge”.A notice in the Tuam Herald, dated 24th March 1841, lists 44 land occupiers, mainly in the parish of Killannin who were required to attend Oughtrerard Sessions on April 16th 1841.

One was  R.J. Martin, Doone Lodge, Captain Dragoon Guards. Rateable valuation was show as £50.00. In a letter dated December 14th 1915 to the Tuam Herald, Robert J. Martin of Athenry makes reference to Doon. He had an issue with contents in “Old Irish Life” {1912} by his cousin – Mrs. J.M. Caldwell- concerning kinship and a snuffbox allegedly given to Major Poppleton by Emperor Napoleon Bonaparte, whom he was guarding in the island of St. Helena. Major Poppleton was married to Margaret Martin of Ross.

In relation to “Cathair Anne”, local folklore: “Anne” who was a member of the Ross family, was difficult to live with and as a result she was bannished to Doone Lodge. Apparently  it was her wish to be buried on a hill top overlooking the Lodge. There is no confirmation of this having been so. The hilltop is marked by a grove of trees and from where Lough Corrib from Portacarron, Portdarragh, as well as Ross Demesne,can be viewed.

Captain R.J. Martin and Major Poppleton are buried in the Martin family vault in Killannin cemetery