You are here: Home>Places>Glengowla Mines 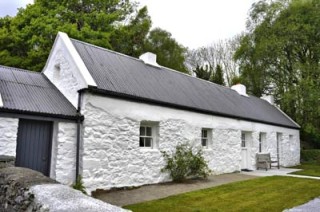 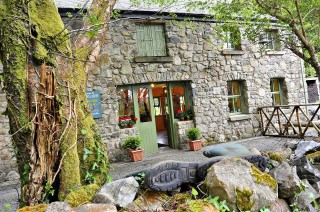 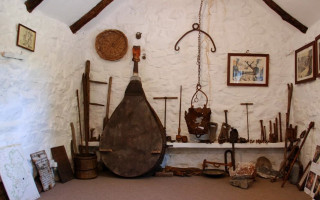 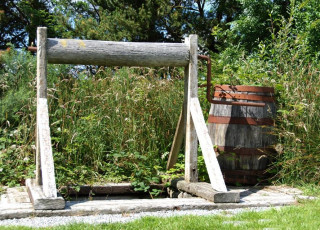 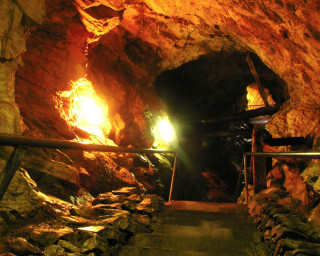 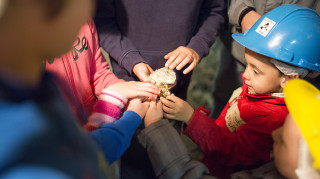 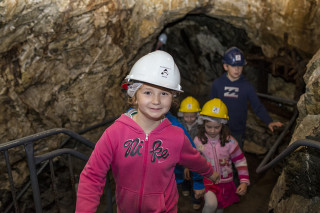 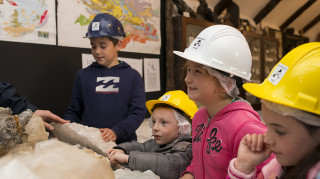 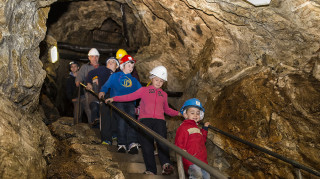 Glengowla Mines, situated 2miles west of Oughterad on the N59, Galway /Clifden Road is an impressive and remarkable historic 19th century silver and lead mine, which was probably opened to supply work during the terrible era of the Great Famine in Ireland 1845-1847.

It is part of our industrial heritage that has been reclaimed, restored and transformed into an outstanding visitor attraction.

The mine was opened in 1850 and closed by 1865.  It is a unique reminder of the 19th century methods of ore extraction and processing. Rock formations in Glengowla are the roots of mountains which once reached great heights. The tour explores large marble chambers and caverns studded with lead and silver pyrite and veins of calcite and quartz in addition to other precious materials.

The mine is noted for its rare and beautiful octahedral crystals of fluorite and quartz. It is Ireland’s only mine which is open to the general public. The owners of the mine Mr and Mrs Paddy Geoghegan and their son Keith welcome visitors to the mine and conduct guided tours every twenty minutes. The discovery of “Tumblers: of lead on the surface during farming operations resulted in the opening of the Glengowla Mines in 1998.

In the Natural History Museum in London there is a piece of fluorite, pale green octahedron 7cm. across with calcite, galena and pyrite from Glengowla East mine Oughterard on display.

Mr P.J.Foley from Waterford was master of the mine. He was probably an engineer by profession. P.J. Foley M.E. was responsible for the reports held in the National Archives in Dublin which give a good insight into the daily progress – in the early 18750s. He was responsible for sinking the engine shaft.

Captain Tracey drew up plans on the mine. It is thought that Captain Tracey came from Cornwall. A man know as Captain Paul also worked at the mine. This man was also a native of Cornwall and the “Paul Shaft” is named after him.

At the far end of the present house, once the agent’s house was the paymaster’s office where workers were paid. The workers came from the area of Oughterard, Leam, Derryglen and Connemara. Other buildings of interest are the Blacksmith’s shop, Circular powder house (magazine), Horse whim, hand-winding stow and Spring well.

The miners worked long hard hours under difficult conditions, in dampness and wet under the ground.  They had only the light of a candle to help them to work and mine the rock in the deep dark shafts of the mine. They were paid according to the amount of lead/silver they mined.  Therefore they all had to work as a team.  They cared for each other and supported each other in every possible way. This spirit of co-operation was in all their best interests. On a pay sheet displayed in the Mine Museum the names of the following families appear – Geoghegan, Mc Gauley, Sullivan, Molloy, Curran, Clune, Curley and Conney. Other surnames connected with the mine include – Louisden, Madden, Mc Anly, Halland and Kenny.

How did they mine the rock?

The first major task they had to undertake was to pump the excessive water out off the mine. This they did this with the aid of a power wheel, an 18 foot over shot wheel. The water to power this wheel was channeled from the tributary of the Owenriff River, the Conga which flows down by John Sullivan’s bogs. The power from this water wheel was used to drain and pump the water out of the mine. As the mine was worked deeper into the bowels of the earth the power of this wheel was weakened and later an attempt was made to introduce an engine but then the mine closed.

To mine the rock it was necessary to use explosives. Holes were bored by a man holding a long bar which he turned continuously while two men hit it with a sledge-hammer. In the dim light of the mine (candlelight) this was a very dangerous task as one misplaced blow of the sledge-hammer could chop a man’s finger off. If an unfortunate accident occurred which put a man out of work, then it would be his fellow workers duty to look after the injured man’s wife and children. It was difficult enough to look after ones own family besides taken on the burden of another man’s family.

It took 7 hours to drill a hole in the rock and up to 14 hours to drill a hole in the dolerite rock which is a hard igneous rock. The men usually drilled 4long holes and then they packed the holes with explosives. They then ran quickly to a safe shaft, opened their mouths wide and waited.  It was essential for them to keep their mouths open otherwise the noise of the explosives would shatter their eardrums. This was indeed very dangerous work. If the miners were lucky in finding lead/silver they would be paid a wage according to the weight of lead collected but if for some reason they were unfortunate not to find lead then they had no wages to take home.

Captain Foley sent a report in 1851 to the local landlords, the O’ Fflaherties, stating that Maddens who were probably the stone-masons in the area, had completed the Stone Powder House with its thatch roof.  The explosives were kept in the Barracks in Oughterard and transported to the Powder House when it was needed. Sometimes some of this powder went “curiously astray” on its way from Oughterard to Glengowla!!

Beside the Powder House is the Blacksmith’s Forge which was used to mend tools and implements used in the mines.

The miners entered the mine through a hole in the ground opposite the Agent’s Cottage and the Paymaster’s office. They used a ladder to enter the mineshafts.

When working in the mines the workers stood on platforms made from pitch pine. The pitch pine was imported from America. It was carried on the coffin ships that took the starving people from Ireland to America during the Famine.  The original pitch pine, which was used in the mine was still found intact when the mine was drained by the present owners. Pitch pine is very resilient to water and that is why it was considered good material to build platforms in mines. This same timber is used in canal locks, railway line sleepers, parquet floors and exterior windows and doors.

Removing Minerals from the Mine

The miners loaded their minerals on to a bucket shaped object called a “Kibble”. The kibble was hook on to a long rope which was hauled up manually through ‘Paul’s Shaft”.

A hook at the bottom of the cable meant that the rock minerals could be emptied easily into carts. Later a horse was used to haul up the buckets through the “ Whymm Shaft” The horse was tied to a large wheel which he helped to rotate by moving around in a circle. Ropes on pullies hauled up the cables from the depts of the mine.

Galena: 80% lead and 3% silver. In bygone days lead was put into bars and this was known as “ Pig of Lead”(in other words a bar of lead).

Dorelite : an igneous rock – very black and hard.  It is a decorative rock used in statues and floor tiles.

Zinc : this is used in galvanizing iron to prevent rusting. Found also in paints and anointments.

Copper Pyrite : In the 1850’s the miner used the veins of copper pyrite as a guide to the location of galena deposits.

Calcite : when calcite is broken it forms a six sided shape called a rhombus which are double refracted i.e. if you put it on a piece of paper with a dot outside, it will show two dots.  This calcite can be transparent and the Vikings used it on the high seas to find the sun during the times that the sun was hidden from view by the clouds. Transparent calcite was known as “Iceland Spar”.

Barite/ white Barite ; Substance from this rock is used in fliers, fireworks, as a base for paints and in the chemical industry.  It is bright green in colour.

Cathal O Sullivan , Leam has done a detailed study on Glengowla Mines for his thesis for the Department of Mineral Engineering, Athlone Institute of Technology. He completed his degree at the University of Exter, Camborne School of Mines, Cornwall. For further information contact Cathal.