You are here: Home>Places>Nuala's Thatch Cottage 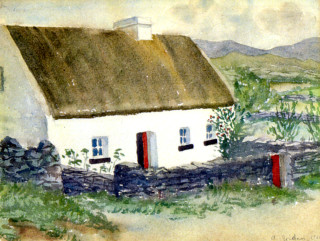 Nuala and Harry Walshe’s thatch cottage at Béalnalappa was built around 1890.  The cottage was situated on the old main road to Galway. Pat O Brien and his sister Sarah lived there before Nuala and Harry. A part of Sarah’s spinning wheel is still stored in Nuala’s attic.

It was a four roomed cottage – two bedrooms, a large kitchen and a back kitchen. There were two out houses, a turf shed and a cow shed with two stalls.

Nuala came to live in the cottage when she married Harry in the mid fifties as she wrote in the book, “Out of the Blue” –

“In the 50’s and 60’s this is how eight of us survived in a four–roomed thatch cottage with no running water. We had a well and electricity and our own turf. We kept a cow for butter and milk. We kept hens, ducks and turkeys to save money. We made things from old flour bags – such as football togs, pillow cases and sheets. We used nappies that we washed and re-used again. We made our own brown bread, cakes and buns. We grew our own vegetables.”

Indeed the 50’s, 60’s and 70’s there were challenging times in Ireland but families tried by every means possible to become self sufficient.

“Out of the darkness

By the pace of life,

come to the surface.

Let the light shine on them.