You are here: Home>Places>Oughterard engraving C.1853 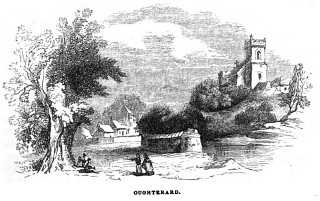 “Romantically situated within a mile of Lough Corrib, and watered by the Feogh, which forms a succession of small rapids, called the Salmon-leap, above the village, and carries its limpid stream through the town, passing before it reaches the lough, under a natural broken arch of limestone. Oughterard contains a small barrack for infantry, a church, a commodious Roman Catholic chapel, a sessions house, and a small Inn where cars can be hired. Near the Salmon-leap is Clareville, the lodge of T. B. Martin, Esq.

The country around is wild and romantic; but near the town it has been of late years considerably planted and improved. The shores of the lake are not bold; and boats with passengers ply across it to Cong, which is distant only nine miles. Along its margin a road extends for nine miles.

Though the shores are not bold, in some places they rise sufficiently high to give effect to the scenery, and to afford good views of the little islets which are scattered over the surface of the lough.”