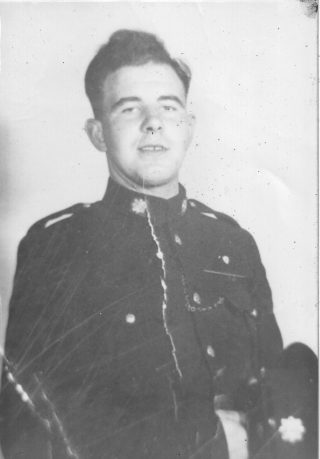 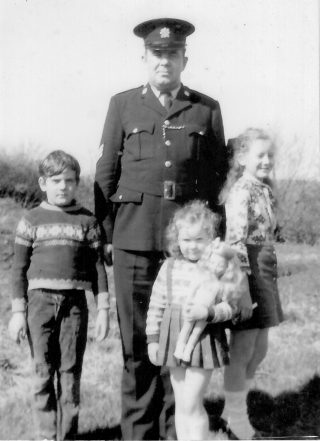 Athletes in the line of duty

When I was a youngster growing up in Killannin, Ross Sports were always the highlight of the sporting year. All my brothers and I were mad about athletics and the weight throwing disciplines in particular. The non-existence of a club structure however, put us at a big disadvantage, so when I moved to Dublin in 1954 to start my career as a police man I joined the Civil Service Athletic Club without delay and trained regularly each week in Kilmainham. I practiced the shot, hammer, and discus but without doubt the 56lb was my favorite discipline. I competed in a number of All Ireland Championships in these events and had many great contests with Michael Hehir (Moycullen), Mick Tobin (Tipperary) and a fellow from Cork named Twomey. Ultimately the dream of landing that elusive All Ireland titled never materialized after being transferred to Murrisk in Co. Mayo in 1959, I concentrated subsequently under provincial scene.

The shot-putt and hammer events weren’t very common outside Dublin, so I came to concentrate exclusively on the 56lb, winning a number of Connacht Senior Championship titles in the process. I joined the Westport Cycling Club, not for the purpose of cycling but solely to become a registered athlete, in order to compete in official NACA Championship Competitions. In 1961, I threw a personal best of 27 feet 10 inches, and before the year was out my career was to take me westwards to Achill Sound.  There was no local branch of NACA was I continued to train and practice nonetheless and over the next four years I participated regularly in open sports meetings at Attymass, Ballina, Rossport, Erris and Bonniconlon to name but a few. I have fond and nostalgic memories of the above, but in truth the level of competition was nothing to compare with the capital.

In 1965, I was promoted to the rank of Sergeant and took up residence in Letterfrack. Before long, I struck up a great friendship with talented Renvyle athlete, Michael Joe Ruddy. I believe that the Ardnagreevagh man was potentially good enough to win national titles at long jumping and sprinting had he received the required coaching and mentoring from a young age. Michael Joe was also very adept at throwing the 56lb and we practiced together at the back of the barracks from time to time. He eventually went on to become a Connacht champion at the event which was a tremendous honour for the parish at the time.

Eagles Nest Principal, Michael O’Neill, a talented long jumper in his youth, was another man locally who shared my love and passion for athletics.  A man of great vision, he was also a gifted organizer, and alongside myself and Michael Joe, he too was interested in creating some type of athletic sporting outlet for the youth of the parish. During 1973, we were well aware of the Community Council’s outstanding initiative re Community Games, and we decided to supplement the above by establishing a club unit and registering it with NACA. Renvyle AC’s first big Field Day was held in Kylemore on August 25th, 1973, courtesy of Dame Agnes Finnegan. It was a beautiful setting and the big crowd made for a fantastic atmosphere. Athletes came from all over Galway and Mayo. The most famous of these was undoubtedly Oughterard’s Mick Molloy, who had run the marathon at the 1968 Olympic Games in Mexico. On that particular day, he won the 3000 meters in comfortable fashion.

We trained the Renvyle youngsters and the White Strand and as well as being quite talented they were also very mannerly and amenable, which made our task easier and more enjoyable. On a personal level I had no formal training in the art of coaching so I just passed on the benefit of my experience as best I could. Sabina Thorpe’s Gold medal at the Connacht Championships in Claremorris was undoubtedly the club highlight of the year and I took a lot of personal fulfillment and satisfaction out of it. I was also acutely aware of the fact that there were a lot of talented athletes in Letterfrack CBS but they were never destined to join the club. We made no formal approach, possibly because of a fear of the unknown. I knew that the acquisition of a few of these lads would have raised the bar within the club in terms of standard and competitiveness.  However, I also felt that they didn’t have a very positive disposition towards policemen in general and consequently I didn’t proactively push for their inclusion. The Christian Brothers were equally culpable as they had ample opportunity to visit the station and discuss the matter at length but decided against this course of action. If I could do it all over again, I’d have a different philosophy.

The Renvyle Athletic Club lasted only three years. I transferred to Gort in 1974 and Michael O’Neill became heavily immersed in community development. Parental interest and support left a lot to be desired. In the eyes of some, the club was little more than a babysitting service, an attitude that is still very prevalent to this day. On arrival in Gort, I was immediately drawn into the local athletic scene and assisted in the setting up of South Galway Athletic Club which catered for Beagh, Kinvara, Shanaglish, Ballindereen, Gort and Kilbeacanty. I serve as Club Chairperson until 1981 and during that time I also held the position of Chairperson of the County Athletic Board.

My involvement in athletics over many years helped me greatly in my professional work because it enabled me to get to know young people in a very natural, positive way. Ironically enough, I never got any positive feedback from within my own profession. More often than not, the perception from my own rank and file was that I was on a bit of a fool’s errand. I was disappointed but sadly not surprised by this attitude of mind but if everything is only strengthened my resolve to persevere my vocation work. In 1982 at the age of forty-seven I competed successfully in the 56lb for the very last time at Garda Sports in Salthill. Two years later, I retired from the force and from athletics.

Remembered by Peter Walsh and written by Paul Gannon

Sergeant Peter Walsh served the Parish of Letterfrack and Ballinakill from 1965 to 1974.

Peter commenced his service in An Garda Síochána in the former Dublin Metropolitan Area in 1954, his first station being Kevin Street. He later transferred to the Mayo Division where he served in Murrisk and Achill Island. In 1960 he again transferred to the division of Galway West, serving in Letterfrack and Gort before retiring in September 1984.

Peter was a well-known and highly respected member of An Garda Síochána. Outside his commitments to his family and career, his love of sport came next. While serving in Gort, Peter was involved in setting up the South Galway Athletic Club and was chairman of the Galway County Board of the BLE, while in Letterfrack he was instrumental in reviving the annual Renvyle sports.

Peter is survived by his wife Margaret ‘Peg’, four daughters, one son and eight grandchildren. He is also survived by two brothers and two sisters.