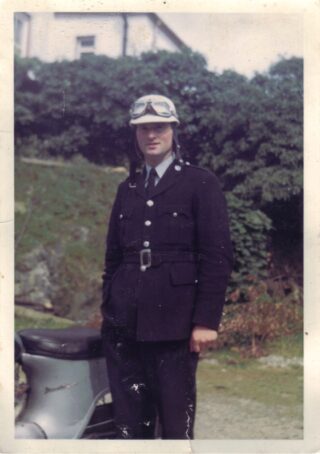 Garda Peter Cunningham in his motorbike uniform on duty in Donegal, 1967. 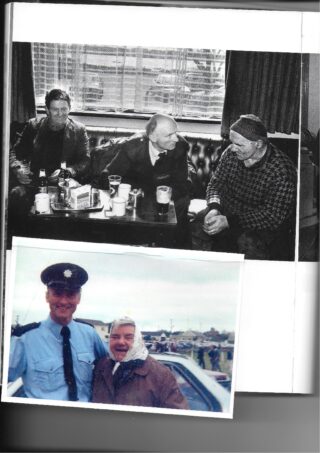 Top photo: Taken in a bar near Lettermullen, Refreshments and debriefing with explosives staff following a day of blasting rock for foundations. Lower photo: Show Day Oughterard with the late Mrs. Geoghegan, Claremont.

There were handshakes and tears all around. It was the 6th of May and I said to myself, ‘I will not forget this day’. And I didn’t.

It was the day I left home, and when you leave home you always think of going back. It was hard leaving families and friends and the people I knew. I would miss, too, all the activity of the place, the sound of music, the sounds on the farm in all their simplicity and jostle of the village, cart-wheels, taking home the corn later that Autumn.

I was on my way to train as a garda in Templemore. As my sister drove me to the train, we made an effort at small talk and then a quick goodbye. The following day, I and my new classmates, there were 60 of us, were all fitted with our uniforms, and that was a very strange feeling. Looking in the mirror, I thought to myself, ‘how well will this cap fit?’, but I would try and give it my best shot.

I knew that this was the first day of a very different life, that I would endeavour, as far as possible, not to change from being the person that I was. Here, there were different activities altogether. The bugle blasted out each morning for reveiller and again at 11.30pm for lights out.

The study was quite intense, with the overall emphasis on 1. The protection of life and property, 2. The prevention of crime rather than detection and 3. The preservation of the peace. It was a relief between lectures to get training on the square and in the gym. Of course it was a strange sight to see about 400 of us in uniform being marched up the street for Mass in the parish church. This was still new to the local people and they would be out when we passed as the training centre was newly opened in February of that year.

At that time there was a large intake of men and a few women. The first generation of Gardaí were by now retired and retiring , hence, the large number and the courses being 18 weeks, only.

Our Passing Out Parade was on 11th September, 1964. The following morning we were dispatched all round the country. There were three of us going to Donegal, so we were issued with vouchers and our bags sealed before we left as we would cross the border on the train to Strabane. It was late that night when I arrived at Glenties Garda Station.

While on foot patrol the following morning, it struck me, that I was in the Highlands of Donegal. The people stood for a chat and to greet me. They were naturally friendly and they made it very easy for me to blend in.

Now, I was, you could say, living in a different culture. I was getting to know new people, new names and a different lifestyle. New words too, like I was getting very pernickety about things. Though I thought I was tall enough I had become the ‘wee lad’ from the west with the funny accent. Of course various names would be added during the rest of my career!

Gradually, I would get to know the people of the Glens, the Croaghs and the Blue Stacks area. The older people would talk too about the ‘Polis’, ie the RIC, the new Civic Guard and the change, and for the better this new unarmed force brought after 1922 (after all this was only 40 plus years later). Of course, in training, this was something that was not talked about or recommended, with strict instructions never to get involved in politics and one now had to be careful. But it was educational all the same.

This area too was home to the famous Donegal tweed and knitting industry, the home of fiddle player John Simie Doherty. The big Glen of Glenties as home to navvy poet, Patrick McGill.

I was in good company.

In the station my colleagues were helpful, laid-back and that suited me nicely. I soon became aware that they were quietly doing their bit in the nature of public relations, which was good.

There’s a story I’d like to tell here. In my early days in Glenties, a caller from Ardara said that there was a strange man in town. The plain-clothes Garda and myself went over there, met the man coming up the street. He was swinging an umbrella, wearing an overcoat with a doctor’s stethoscope slinging from its pocket. The man, I’ll call him James, said, as it was a beautiful sunny day he didn’t need the overcoat nor the umbrella and as for the stethoscope he was not a doctor and had no need for it either.

Later that day we brought him to Mountjoy on outstanding committal warrants in a hackney car. We stopped for a break in Cavan town. In the hotel as we waited for tea and a light snack there were refreshments at the bar. James, although now a Guest of the State, being ever the gentleman insisted on buying his round too, which tasted good and I received another juice and a pot of tea. As we left the hotel on the second leg of the journey, James was pleased, we all were pleased. On our way there was a relaxed discussion about current affairs, sport, and I would say that the  prisoner excelled in the talk on criminal matters. Shortly afterwards James was received at the prison, with open arms, no introductions needed. When we were leaving there were handshakes all round. The prisoner was back at home.

The following day the good doctor received his umbrella, his Ardara tweed patch-pocket overcoat and his stethoscope. He was pleased too.

After that experience I said to myself, ‘Peter, always try to be a human being first and foremost’.

Later on in my years as a motorcyclist in Donegal it always felt good to be allowed to use my discretion while on patrol. Being mindful at all times of maintaining good relations with the people I served, was important to me.

On my journey from my first station to Oughterard I served periods in Bundoran, Convoy, Ballyshannon and Portumna, arriving here in 1977.

On arrival the people of Baurisheen settled us in nicely by the lake and looking out on the islands was only magical.

The station was an old dwelling-house and it was necessary to keep a good open fire on in the sitting room, or rather the public office at all times. No counter in those days. It was homely you could say.

There was a very good working relationship among the members of all ranks here, which I think made for good relations with the people once we went out on duty. Though after some time here, I found that I was losing the sight somewhat, as I was expected to, sometimes, I would say. I went along with it anyway!

Good humour and laughter goes a long way. I went into the newsagents one morning. It was at least six months after the famous racehorse Shergar went missing. The good lady sitting behind the counter was laughing as she said to me, “I had a colleague of yours into me earlier and I says to him ‘I haven’t seen you for a long while’, and you know what he said to me, ‘Surely I was tied down with Shergar’. (meaning of course, out looking for the horse). He quickly left the shop”.

“Did you ever hear the like, Peter, just imagine, tied down with Shergar?”

“And it’s hard to tie him down alright!” I said.

“Well” says she, “at least he broke loose, the poor horse wasn’t as lucky!”.

I recall there was always a bit of cat and mouse going on when I was around, and my own lads too could be in the mix. A little disadvantage of working and living locally, I suppose.

It’s only now, when it’s safe, I’m hearing about these things. Well this was Oughterard in my time anyway. Give and take. So that’s enough of that.

Though times and policing have changed much since then, I would say to any young people entering the service today not to forget the basics- Protection and Prevention and project a good image , as is expected. As for present day policing, I’ll leave it to you and the Gardaí to speak on that.

I wish the Gardaí here the very best on celebrating this, the Centenary year of the founding of the unarmed force. My hope is that good relations with the people will not be overlooked in the years ahead.

Here, I’ve jotted down a few of my light hearted thoughts from my early days in Donegal and later here in Oughterard.

I have stayed with Donegal because it is said that a Garda has a Grá for his first station. This holds true for me as I met my wife, Mary in Glenties in 1967 and we married in 1970. We have fond memories of the swinging 60’s there and we still go back.

And now as I am tired, I reflect on those long-gone times and I ask myself, ‘have I changed much?’

How well did I wear the cap along the way?

Well, I hope I gave it my best shot.

Was it only yesterday?