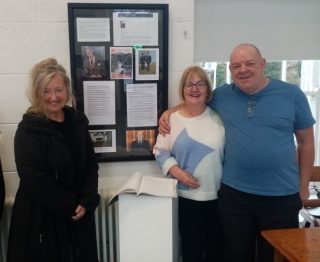 There is widespread sadness in Wexford following the death last weekend of Mr. James Feely who served in the county as a Garda Inspector and Superintendent for 20 years.

Mr. Feely, aged 85, of 4, Parkview died last Saturday at Lawson Nursing Home, Glenbrien where he had been in the loving care of staff since becoming ill about two weeks earlier.

He is survived by his wife, Essie; his sons, John and James (Dublin); his daughter, Eleanor (County Clare), his daughter-in-law, Eleanor, his grandchildren, relatives and friends.

A native of Cloonacool, County Sligo, he was predeceased by his brother and sister.

James spent 43 years as a member of an Garda Siochana serving in Clare, Leitrim, Wicklow and Carna and Oughterard in County Galway before coming to Wexford town as Inspector in the late 1960’s.

He was later promoted as Superintendent to New Ross and during his career in the county was involved in various criminal investigations.

When he retired in 1984, the then District Court Judge, Dermott Dunleavy paid tribute to him with a quotation from Shakespeare’s ‘The Merchant of Venice’ saying he always ‘tempered justice with mercy’.

In offering personal condolences to his family in the days following his death, many of his former colleagues remembered his sense of humour and his ability to make light of a situation.

An intelligent and knowledgeable man, he had a deep love of literature and nature, was well-read and always kept up-to-date with current affairs.

Though he grew up in a conservative era, he was very open-minded and individualistic and appreciated these qualities in other people.

He was a good listener and confidante who was genuinely interested in people and had a charming and disarming manner with everyone he met, regardless of social standing.

On the social front, he loved horse-racing and was a familiar and well-informed punter.

As a younger man, he was a handy club footballer in Clonegad, County Clare and was also an accomplished runner and athlete.

A memorial service was held in Macken’s Funeral Home on Monday evening and James was taken to his native Cloonacool for burial on Tuesday morning.

Jim Feely served in Oughterard in the late 1960’s with his wife Essie, daughter Eleanor and son John, who was born in Oughterard.