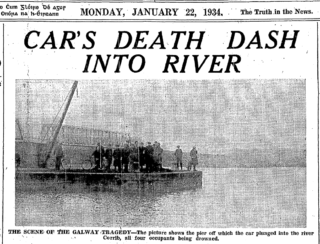 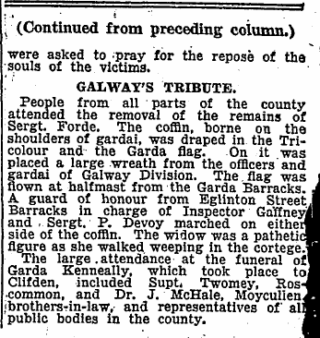 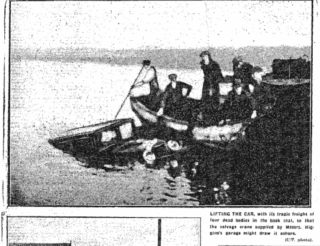 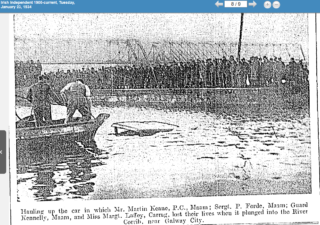 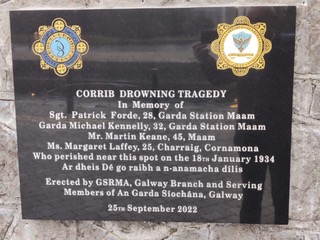 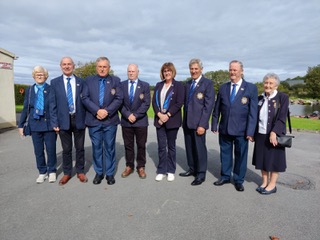 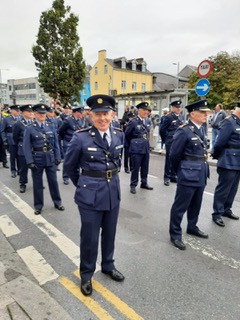 “Over the years, the River Corrib has seen many tragic moments because of drowning accidents. While the Anach Chuain disaster of 1828, was terrible, with the loss of 19 people, one of the saddest must be the tragedy that occurred during a cold winter’s night of January 1934.

What makes this accident so haunting is the fact that the people who lost their lives were neither boating or swimming: they were occupants of a motor car who should not have been in that particular area on that night. What is even sadder still is that they drowned within ear-shot of a dance that was being held in the Commercial Boat Club. As young people enjoyed the dancing and music in the hall, four others struggled for their lives in a submerged car just outside. Many people say that one cannot escape fate, and this is a story of just that: it is haunting to say the least as one examines the circumstances that led to this appalling tragedy.

“Whilst the band played and the dancers danced at the Commercial Boat Club, Galway, on Thursday night last, a motor car returning from Ballinasloe plunged into the Corrib at the end of Steamer’s Quay, carrying its four occupants to death in four feet of water.

No one heard the splash: no one witnessed the grim tragedy of a mistaken road. All was over in less time than it takes to write the story.  It was not until Saturday morning, after a diligent search by the Civic Guards, that the car with its huddle of dead bodies in the back seat was found lying on its left side beneath the waters.

The names of the victims were as follows:

Sergeant Forde (28) in charge of Maam station, a native of Tynagh, Co. Galway, married; leaves a widow, a son and a daughter.

Guard Kenneally (32) Maam, a native of Newtownsands, Co. Kerry, married; leaves a widow and one son.

The purpose of the ill-fated journey that day was to take a girl, Sarah Laffey, who had been ill for some time, to a hospital in Ballinasloe. The first leg of the journey was from Maam to Carragh in Cornamona, where the girl lived. Her sister, Margaret, decided to accompany her and travelled with them. The party started on their journey for Ballinasloe about 12:30pm and arrived there at 3:30pm. They travelled in a 1929 green saloon, Fordor Ford car, the property of Martin Keane of Maam, who was also the driver.

The following report gives a graphic account of that fateful journey from Ballinasloe.

They did not delay long for they are known to have left Ballinasloe on the fatal homeward journey at 5.30pm.  It would then be dark and the journey to Galway would take sometime longer than in the daylight: nevertheless, they seemed to have arrived in Galway sometime around 8o’clock. After sandwiches and refreshments at the Imperial Hotel, Eyre Square, they entered into the final stage of their journey about 8.45pm. A few minutes later, two civic guards, a male driver and a girl were seen by some young ladies to come to a halt alongside the kerbstone of the footpath crossing the SalmonWeirBridge. Obviously, the driver either wanted to enquire the way via Headford, or the party had first decided to go via Oughterard and had subsequently changed their mind and resolved to travel via Headford to Cornamona, so that they might leave Miss Laffey home on their way to Maam. This would have saved the driver the journey from Maam Cross to Cornamona. Whichever be the fact, after the young ladies had passed on, the car turned about and drove back towards Wood Quay. Thenceforward the whole grime tragedy is shrouded in mystery.

“If the driver had taken the lower or riverside entry to Woodquay it easy to understand that in turning around the block of houses, he would momentarily lose his sense of location, take a short turn towards the left and drive ahead under the mistaken impression that he was setting forth upon the main Galway – Headford road.

‘Alternatively, there is a theory that he saw the red rear light of a motorcar going towards the Commercial Club, which is to the right past the railway viaduct near the end of the cul de sac; but this speculation appears to be negative by the fact, that although the Ceili began about 8pm no motorcar beyond the ill-fated Ford (which does not appear to be seen by anyone) passed on that way. It seems more likely that the driver mistook the road because he had approached it from an unusual angle. It must be remembered that, whilst most citizens of Galway are familiar with every highway and byway in it, Mr. Keane would not possess such knowledge moreover, he had driven a light saloon car with a full load over 150 miles of road that day, with brief rest and light refreshments.

Whatever be the facts, natural evidence would indicate that, having set out on the road for home, the driver put on speed as he came under the viaduct. The night was dark with a south westerly wind, occasional showers and little fog except in marshy areas of river reaches. The sheen of the water may well have been mistaken for the road – until it was too late.

The unsuspecting Céili ran its course. All unconscious of the grime tragedy that lay hidden beneath the waters outside. Even if anyone had witnessed the fatal crash of the car into the swirling waters, it is doubtful if any of its occupants could have been saved.  At the spot where the tragedy occurred, the pier ends and the water is some 3 or 4 feet below the ground level and deepens outwards. Within ten feet from the edge of the pier, the driver appears to have recognised his mistake. Immediately in front of him was a stone mooring block; to his left a crane. In a panic, he jammed the handbrake, and it may be assumed he also applied the footbrake and declutched. He had by this time reached the soft grass by the pier edge. The sudden application of the brakes caused the car to skid violently, flew around and hurtle itself into the waters below, smashing the windscreen and other glass, and falling over on its side.

The alarm and search

In view of the long journey, the party was not expected to return at an early hour, when, however, they did not arrive home on the following morning their relatives, friends and the two remaining colleagues of the Garda at Maam station began to be alarmed. Superintendent Heaphy of Oughterard in whose district the station lies was notified.

Immediately, the most diligent inquires were set afoot. The mystery deepened as the long hours of Friday dragged by in fruitless and futile search and inquiry. The party had disappeared as completely as if the ground had swallowed them. The wife of one of them said that she knew instinctively that they were in the Corrib, but where none could tell. Superintendent Heaphy and his colleagues put in a period of agonising suspense.

Directly when the first glimmer of daylight appeared on Saturday morning the search was renewed. Sergeant Lawlor with detective Officers Walsh and Johnson and Guards Donohue, Carey and Moran combed the waterside.

About ten o’clock the fatal wheel-marks had been found. There had been an attempt violently to brake and a car on the soft slippery grassy surface within ten feet of the pier-head with the inevitable skid had no chance.

But for these wheel marks the mystery might have remained until the entire river had been dragged at every point where it was possibly for a car to enter it or likely to be driven towards it. Soon after the car was discovered, hidden beneath the water and lying on its left side…’

This was one of the great tragedies of Lough Corrib.

Many thanks to Brian McNulty grandson of Sergeant Patrick Forde for sharing a wonderful and rare photo of his grandfather.

Many thanks to The Galway Branch of the Garda Síochána Retired Members Association (GSRMA) for photos at the unveiling of the event to commemorate the Corrib Drowning in 1934. The unveiling was incorporated as part of the Garda Siochana Centenary Celebrations. It took place on Sunday 25th September 2022.