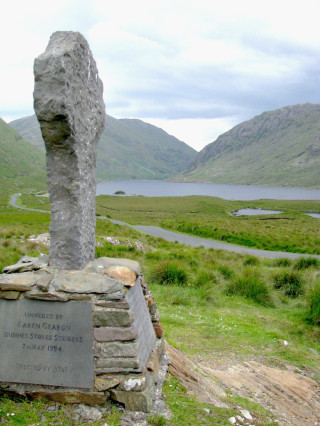 From the above quote one can see that the governing principle of the workhouse system was that relief was given at public expenses should be less than that which cold be obtained by exertion outside it.  Sir George Nicholls, who was well acquainted with the Poor Law System in England, was sent to Ireland in 1837 to introduce the workhouse system to this country.  The state of the inmates, who were “ worse clothed, worse lodged and worse fed” than the independent labourers of the district, was such that nothing short of absolute destitution and necessity would compel anyone to seek relief there, and would also ensure that they would quit it again as speedily as possible. Nicholls also noted, during his stay, that “ confinement of any kind is irksome to the Irishman.”

Under the Poor Law act of 1838 the workhouses were to be the central feature of poor law relief.  They were to cater for “ such destitute poor persons as by reason of old age, infirmity or defect may be unable to support themselves.”  Preference was given to the aged, the in firm, and the defective and to children: only after these had been provided for were the Guardians at liberty to assist other persons in need. This poor law had been designed to deal with small numbers, not the catastrophe that overwhelmed it in 1847.  Workhouses all over Ireland in 1847 were overflowing, and the death rate rose drastically.  Standards of care, already low, collapsed completely.  The food provided was often foul and rotten, but the slightest hope of food of any kind was enough to b ring crowds to the gates of each workhouse begging for admission.

In order to qualify for relief for the whole family, had to enter the workhouse together (the only exception to this rule being orphans and deserted children who were admitted unaccompanied). On entry the families were classified and segregated, fathers and sons going to the male quarters, mothers and daughters into the female section; children over two years were separated from their parents and sent to the children’s ward. The authorities maintained that girls were segregated to protect them from sexual abuse.  The poor law authorities were continually on the watch to see whether the children left with them were really orphans or had contact with families outside.  But however hard they tried to prevent it, parents would leave the workhouse in the middle of the night, climbing through windows and over high walls, abandoning their children.  Emigrating families left behind hundreds of children. They were to follow on later, but it was difficult to trace children in the workhouses, as those who were left were very young. They often forgot their own surnames and forgot too that they had parents still living.

1.      The Admission or Receiving Wards

In addition, there was, on the female side, a nursery and maternity ward.  It is of interest to note that one category of persons for which provision was not made at this time (1838-18480 in Ireland was the unmarried mother. Places were later made available.

There was a clause in the Act that stated that if you held a quarter of an acre of land you were not eligible for relief.  Men wanted their little plot of land.  It would grow enough potatoes to feed them in future years when the famine was over, but many of the landlords thought there were too many smallholdings and they wanted them eradicated.  So if you wanted relief you had to forfeit your holding.  What a price to pay?

Relief consisted of 2lbs. of mixed meal, a quarter pound of oatmeal and three quarters pound of mixed meal per person, per week. It was little but it would sustain life if you were not fever ridden. If you wanted this relief you had to abandon your little holding and so it was that many smallholdings were abandoned between 1847 and 1848.

Like all workhouses that were usually well sited, the Oughterard Workhouse was no exception.  The Oughterard Workhouse, situated on the Seana Féistin road where Creg na Coille housing estate is to day, has an area of 7acres 3roods.  High grey limestone walls that convey a rather dismal prison like impression bound it.  This fine wall was built, I am told, by three Connelly brothers (uncles of Peggie Hogan who owned a teashop on Main St. – Paddy Tierney now owns the property) from Rusheeney.  The men were never paid for the building of the wall. The engineer, at the time, condemned it as inferior stone-masonry.  This, in my opinion, was a very unjust decision as it is a very solid wall that blends in with the background to create a not unpleasing architectural presence.

The Style of the Building

“ The style of the building is intended to be of the cheapest description compatible with durability: and effect is aimed at by harmony of proportion and simplicity of arrangement, all mere decoration being studiously excluded”

George Wilkinson designed the workhouses.  The cost of each of the Irish workhouses was only two thirds of that of similar workhouses in England, the reduction being achieved by a rigid economy in their construction and equipment.  The walls were of limestone masonry, the insides unplastered but heavily white washed.  The floors at ground level were of mortar or clay, being as Wilkinson said,” less cold than stone and less liable to decay than wooden floors.” Only the bare essentials were provided, with very few fine refinements: the atmosphere was one of penury.  Oughterard Workhouse was built at a cost of £5,960 – buildings and £1055 for fittings etc.

Recycling of the Workhouse materials

In 1927-1928 stones were taken from the dilapidated building to build the newly constructed road to the Oughterard pier and the new Connamara road through Claremount. Tom Faherty, Camp St., tom Darcy, Mike Walsh, Tom Gibbons ( Maghermore), Cuimin Mc Donagh and John King all deceased, worked on the roads. John King told me that once to liven up the days work that they tied chamber pots on to the carts moving the stones through the town.  The timbers, windows and slates were auctioned. Some of the timbers and windows were used in sheds in the area.