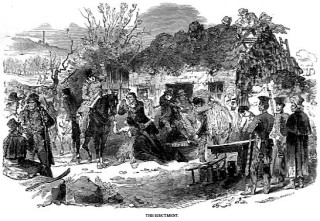 There are so many tales in our folklore relating to the famine 1845 1848. One such story tells of a man going from his home to seek food in Rosmuc. On his way he saw a woman trying to sow stalks of potatoes because she had no seed potatoes. At this time also a girl was going from her home in Rosmuc in search of food.  On her way she saw a rock beside the road. Famished with the hunger and exhausted she decided to rest on the rock.  While she was sitting there she collapsed and died. People now call the rock “ Clocha Chailín”. Some time later a man dropped dead at a rock opposite “Clocha Chailín.” He too was suffering from starvation. No animal will walk between the two stones – they will go around the rock.

Nanny Lydon, the great grandmother of the late John Clancy of Barr na Goirtiní lived beside Glann church. He husband worked in “Teach na Mallacht”, New Village. When their newborn baby was ready to be baptized pressure was but on him to bring the child for baptism to the Established Church.  He refused.  They took the child out over the hills to Letterfore and down to the church in Oughterard for baptism.  The landlord’s man Connor came out the Tonbuí road the following morning and evicted the family and burned their house so that the family would be unable to repossess their home again. It is said that nearing the end of his life Connor came back to the family looking for aid. They gave him spuds. They had forgiven him.

There are two famine graves on John Clancy’s land.

At Farravane, on the land of the late Michael Mc Donagh and Catherine Mc Donagh there was a wooded area with white thorn trees where people believed that babies who died during the famine were buried.  It was a custom among the children, on their way to school in Glann, through the fields that they would stop and say a prayer for the dead babies. The children were often frightened of this area as they feared they might encounter the ghosts of the dead.

Around Eamon King’s home, as around most homes, all the gardens have names, ‘Thady Lydons”and Michil Nicks” and such names.  They were men who were evicted from their own little meager plots of land and were allowed to build their “botháns” on King’s land during the famine.

Behind Clareville house (home of Mr and Mrs John Byrne) on the old Connemara road, a row of “botháns” once stood. All the families were wiped put with cholera during the famine. Mr Mc Donagh, an ancestor of Josie Mc Donagh R.I.P. was about to leave the area when he met the parish priest who inquired where he was going.  He told him that he was leaving the area as the cholera fever had claimed the lives of his friends.  The priest made the sign of the cross on the door of his home and told him to return to his home and that both he and his family would survive the disease. It is interesting to note that the descendants of the Mc Donagh clann reside in this area to this day.

My thanks to the late John Clancy for the stories he told me many years ago.