You are here: Home>Places>Archaeology>Orbsen - Ancient name of Lough Corrib 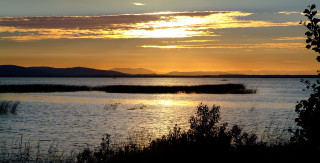 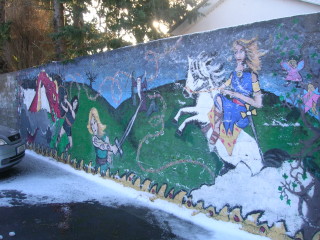 Mural of the "Battle of Moytura" at the Coummunity Centre car park. Painted by the Youth Group, Clann under the guidance of Rencha Boef (artist)
Mary Kyne

The old Irish name of this lake was “ Orbsen” or “Orib” now corrupted into Corrib.

The tale opens with the coming of the Tuatha de Danann tribe to Ireland under the leadership of Nuadh their king. These warriors coming from the wild north drove the previous inhabitants of Ireland the Firbolgs before them until at last a stand was made on the plain of Moytura between Lough Corrib and Lough Mask.  Here, prefaced by a wonderful hurling match in which many players were slain, a three day battle was fought. It ended in the rout of the Firbolgs and the death of their old warrior King Eoghy and all his sons. On the side of the victors many warriors fell too and Nuadh lost his hand in a fierce single combat with Sreng , the second in command of the Firbolg army.

Nuadh of the Silver Hand

For seven long years King Nuadh was recovering from the wound inflicted by Sreng.  Cred, a goldsmith fashioned a hand out of silver for him while Miach – well versed in the art of surgery set the arm.  King Nuadh reigned for twenty years. He was known as Nuadh of the Silver hand.  He met his death in the second battle of Moytura which was fought near Ballysodare, Co. Sligo. The sites of both of these battles are marked by numerous forts, cairns and cromlechs.

Even in those early times romance was no respector of state policy, and so we soon find the conquerors and the conquered intermarrying.  Wars, however, between them were not an end and accordingly about forty years after the second battle of Moytura, Uillinn – Nuadh’s grandson fought with and slew his own kingsman Orbsen.

Orbsen was an ancient De Dannann navigator, Orbsen Mac Alloid, commonly called Mannán Mac Lir, “ The son of the Sea”, from whom the Isle of Man is designated.  He was a merchant trading between Ireland and Britian. He was an expert diver with an acute knowledge of dangerous habours. Orbsen was slain in battle by Uillinn, the grandson of Nuadh.  This great battle took place on the western margin of the lake and from that great battle this district is called Magh Uillinn – Magh Cuillin the plain or field of Uillinn and the lake was called Orbsen.