You are here: Home>Places>Archaeology>Castle Hen

Castle Hen, of which the… [accompanying picture] is a representation is generally supposed to have been one of the 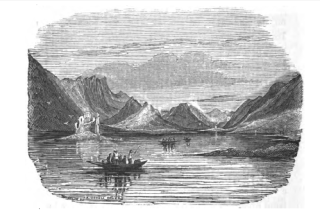 inland castles of Grana Uaile, or Grace O’Maley, in whose time the fortresses around this secluded spot must have been almost unknown, if not inaccessible.  Tradition says it was held by one of the o’Flahertys, who owed fealty to this chieftainess, and it is even supposed by some that it was here the heir of Howth was carried when stolen by the O’Maleys as a punishment for the inhospitality of his parents, and only restored upon condition of the gates of Howth castle remaining open during dinner time.  Be this as it may, this castle, at the period of our history, was in possession of O’Flaherty – but whether the soubriquet of “Na Cullugh,” (the cock) was applied from his great personal courage, or his quartering a “Gallus Gallinaceous” upon his escutcheon, history is silent:  suffice to say, that he was known as O’Flaherty na Cullough, and at constant war with the Joyces, by whom he was surrounded, each party looking upon the other as an intruder.

Much blood was spilt

As long as they feared the assisting arm of the chieftainess of the west, O’Flaherty remained the victor, but upon the death of that heroine, O’Flaherty being reduced to his own resources, the Joyces began a most fearful retaliation, and much blood was spilt on both sides.  At length O’Flaherty and a few of his followers were surprised upon a hunting excursion in the neighbouring mountains, cut off from the castle, and O’Flaherty na Cullough slain.

The Joyces now imagined the castle theirs; but though the cock was slain, his wife defended it with the greatest skill and heroism against all their attacks, acquiring for her the title of “The Hen”.  Hence the real origin of Krishlane na Kirca.

History or tradition is silent upon much of the after life of this lady.  Some say the Joyces made a road into the castle, and demolished both it and its inmates.  There certainly are the remains of a rude causeway leading from the nearest point of land towards the island, which can be easily seen on a clear day.  We know that Lough Corrib has risen much, owing to the number of dams, etc. that obstruct its fall toward the sea.  Besides it differs from other lakes, in being more a congress of water from a number of rivers running together and subject to increase from obstruction to drainage and other causes; it seems more than probable that this causeway was once above the level of its waters.