The Dungeon of Aughnanure Castle 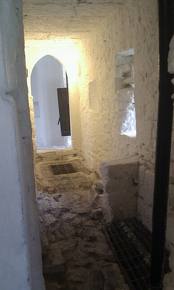 Oubliette located in floor behind wall

Before the conception of the modern judicial system, and before the rights enshrined in Britain’s Magna Carta were extended to the majority of her subjects, the enforcement of the rule of law was performed by magistrates. Simply put these were the ruling class.

To incur the displeasure of those born with a silver spoon in their pampered mouths might have had several outcomes, from the trivial to the lethal and many shades in between.

In what was the old O’Flaherty castle in Oughterard, county Galway, is an innocuous looking wall. Now lime washed, it would originally have had animals skins or tapestries hanging from it as decoration and insulation.

Behind this wall is a chamber with a simple hole in the floor. At first glance the hole appears to be the business end of a privy. While the entrance may have accepted such gifts of the digestive system it was in fact designed for a wholly different purpose- the predominantly one-way traffic of humans.

This is an oubliette: a form of dungeon which was accessible only from a hatch in a high ceiling. No self-respecting landlord could have done without a small personal prison such as this in the harsh feudal times. (Bear in mind, that Galway at that time was a borderland in constant violent flux.)