You are here: Home>People>The Martins of Ross>A Connemara family reunion 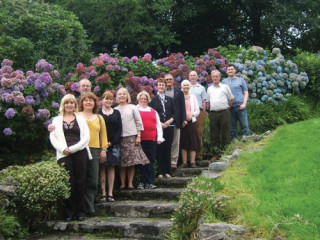 Richard Martin jr decided to leave Ireland for Canada in 1833. The younger son of Colonel Richard ‘Humanity Dick’ Martin, MP, of Ballinahinch, he had expected to inherit some of the family property. However his older brother Thomas — already deeply in debt —broke the entail on the family estates in Connemara, leaving Richard with few prospects. Together with his wife, Emily Kirwan, and their six young children (a seventh would be born in 1834 ), he emigrated, settling at Grand River, Ontario. Richard died aged 80 in 1878, having lived long enough to see his family grow and prosper far more than would have been likely had they remained in Ireland.

The first member of the family to return was Richard and Emily’s grandson, Archer, who made the first of a number of visits to Galway in 1888. He paid to have gates placed at the entrance to Killanin graveyard, and the family chapel within, bearing his name and the date. He visited his Martin cousins at Ross, Edward Martyn at Tullira, and his two remaining grand-aunts in Dublin, all in an effort to compile the family genealogy.

Ever since then, descendants of Richard and Emily have travelled, singly or as a group, to visit their ancestral soil. The latest visit took place at the end of August 2008, when Galway man Adrian Martyn had the pleasure of guiding his cousins around the city and county, showing them places of interest. Within the city, the group visited the site of the Red Earl’s hall on Druid Lane, where their first ancestor in the town had lived in the 1300s; and the site of the theatre in Kirwan’s Lane which Humanity Dick had erected for his first wife in the 1780s, and where she conducted part of her affair with Theobald Wolfe Tone.

The family also visited Killanin graveyard and said prayers in Irish and English at the family chapel.

At Ballinahinch on Sunday they were joined by Mr Martyn’s parents Christy and Noreen, along with Julie and Peter D’Arcy of Lancashire — descendants of the D’Arcys of Moycullen, another of the tribes —Sean and Eileen Martyn of Spiddal, and Sean’s first cousin Patrick Martyn of Rathcarn, Meath. Sean’s branch of the family are the Canadian’s closest Martin relatives still in Connemara. Their homestead at Kinvarra, Camus, was given to their ancestor, Anthony Martyn, by his cousin, Humanity Dick Martin, in the late 1790s; it remains in their possession to this day.