You are here: Home>Places>Killannin>The Shape of Killannin Parish

The Shape of Killannin Parish 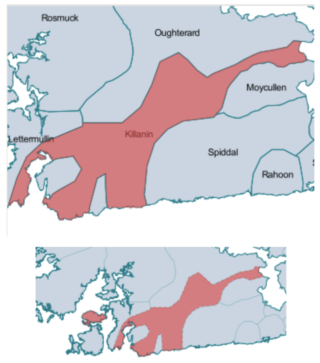 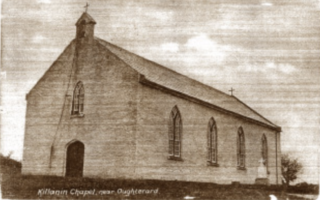 Sir William Wilde, in his 1867 travelogue, Lough Corrib, Its Shores and Islands describes the parish of Killanin in this way:

The parish of Killannin (is) of a most irregular form….It lies between Moycullen on the east and Kilcummin on the west and has a narrow strip of that parish, and a portion of the lake shore on its northern margin, while its south-western extremity extends to the sea.  The ancient territory of Gnobeg stretching eastward along Lough Corrib from the north-western end of Ross Lake, through this parish, and including those of Moycullen and Rahoon, to the town of Galway… (Wilde, p 295)

The odd shape of the parish is a result of centuries of contentious disputes regarding the parish boundaries between dioceses. This article explores the history of these territorial disputes for this one locality, this small group of townlands at the edge of Connemara.

(This map can be found at the National Library of Ireland website: https://registers.nli.ie/parishes/0629 )

The interesting shape stems from differences between the civil parish designations, Church of Ireland parish designations, and the boundaries designated by the Roman Catholic Dioceses and disputes over the primacy and revenues – or: who is in charge and who gets the tithe and tax money.

According to the Diocese of Galway’s website, the first step down the road that to the ultimate shape of Killanin was in 1324 AD when the Diocese of Tuam was amalgamated with the Diocese of Annaghdown, which is named for the headland upon which was built a monastery purportedly by St. Brendan and his sister Brig and is across a relatively narrow part of Lough Corrib from Killanin, making Tuam the metropolitan See of a considerable area. Apparently, the Anglo-Norman Tribes of Galway did not wish to take direct governance from Tuam and in 1484, the Archbishop exempted the City from his jurisdiction, creating the Wardenship of Galway. The Wardenship is quasi-Episcopal in nature, meaning the Warden is like a Bishop but cannot ordain priests.  In 1488, a deed was issued uniting the parishes of Killcomyn (Kilcummin, now the civil parish, largely geographically equivalent to Oughterard Parish) and Killroyne (Annaghdown parish) to the Collegiate Church of St Nicholas, making them part of the Wardenship. (Diocese of Galway, 2019) This would not be the end of the matter, however.

In 1751, a letter from a Brother Joseph Burke states: “Certain priests held Kilcomin and Killanin from the warden of Galway. The separation of these parishes was caused by a priest being placed over them by the warden, contrary to the wishes of some who live there.” (MacLysaght, p 43)

Further, in the same year, in another letter from Brother Joseph to the Warden explains that he has attempted at the Warden’s behest to straighten out the situation, where a single priest had been presiding over both Killcummin and Killanin. Killanin at this point seems to have been attached to the Archdiocese and not the Wardenship but there seems to have been a good deal of confusion on the part of both governing bodies as well as the parish priest as to who had the right to appoint a priest to the parish and indeed who in fact the parish priest actually was for each of these neighbouring parishes. Brother Joseph, after speaking to people “on the ground” as it were, could not sort it out. (MacLysaght, p109)

In 1780, the arrangement is still not satisfactorily resolved, leading to a further exchange of letters between the Wardenship and the Archdiocese. On the 17th of April, the Archbishop reminds the Warden that one Rev. Mr. Mannion has been overstepping his bounds in terms of collecting tithes in churches not in his care, although it seems the parishioners considered him their pastor.

“By what I can hear the two parishes of Kilcumin and Kilanen (sic) run  both to the sea, and were so interwoven with each other, that it was  almost impossible to serve them properly, that the superiors met and appointed credible people to perambulate the whole, and laid out so as that it should be as convenient to each pastor as possible, who laid out and marked the bounds that each pastor should possess and serve in, which was agreed to by both superiors, and continued so peaceably, until Mr. Mannion throws in his bone of contention and his apple of discord. As this settlement by our predecessors was not made without trouble and expense, do pray that we, as we are on the brink of travelling to I hope a better place, leave it as our predecessors did these 80 or 100 years, and let our successors settle it as they please, as we are not accountable for what we found settled before us”. (MacLysaght, p50)

The letter goes on to urge the Warden to convince Mannion to comply. This is followed by a further letter just weeks later, the sense of which is that neither the Warden not the parish priest are particularly well disposed to the Archbishop’s point of view on this. He laments, “I thought there was an end of our disputes and we were to end off our days on the old footing of an uti possidetis (to retain the same borders under new governance), but find you are resolved to change the landmarks set 100 years ago.” (MacLysaght, p51)

The next document in the Analecta Hibericum collection to deal with Killanin is from 1789 and concerns yet another territorial dispute. This time the Warden seems to feel that he is being cheated out of tithe and tax that should be coming into his coffers. Meticulously laid out, then, is an account of all the seaside homes from the hearth-money books, showing Moycullen Parish has 118, and Kilcummin 197, with Killanin at 333, leaving the Archbishop at an advantage of 18 houses, which difference in income would be off-set by the greater wealth of the dairy farmers in the houses between Furbough and Spiddal. Other areas are also in dispute so further details are furnished, including a proposal as to how alterations could be made to make the division equitable, but the response come in 1790 showing that the arrangement does not meet the Warden’s approval. A further letter states that the Warden “hopes His Grace will lay strict injunctions on Rev. Mr. Mahon not to encroach on the parishes around him as he has been in the habit of doing for some years past, which if continues must give rise to disputes among the pastors and prove a source of disedification to the laity.” (MacLysaght, p123)

Around the time of Catholic Emancipation in 1829, the Wardenship was dissolved, and the Diocese of Galway was established by Bull Sedium Episcopalium issued by Pope Gregory XVI. George Joseph Plunkett Browne was created bishop and in 1835 he and Archbishop of Tuam John McHale would visit Killanin in an attempt to resolve the still simmering border disputes, to no apparent gain. Their successors, Archbishop McEvilly and Bishop McCormack, would again attempt to restructure the parish boundaries to everyone’s satisfaction.  They negotiated some trades in terms of townlands, every church retaining its chalice and platen, and rents for the rectories, parts of Carraroe would go to Tuam and Killanin would go to Galway. But they had not reckoned on resistance.  The very popular Father Patrick Coyne refused to have his parish go to Galway and refused to be transferred from his parish. This was mildly problematic to start, as records indicate he was a curate and not a full-fledge parish priest.  What was full-fledged was the ardent loyalty of his parishioners. (Connacht Tribune, 4 March 1977)

Fr. Coyne had been very active as a leader in the Land League, organising demonstrations and achieving reversals on evictions not only for some of his own parishioners but also so in neighbouring parishes as well. Among other meetings and demonstrations, he spearheaded a large gathering at the church that brought 7000 or 8000 people under the auspices of the Killanin Defence Association in November of 1879, as reported in the Dublin Weekly Nation on 22 November 1879. While the bishops petitioned Rome and got approval for their scheme, Fr. Coyne was not inclined to abide by this directive and stayed put. (Connacht Tribune, 11 March 1977) There was some speculation among parishioners that Fr. Coyne was in fact targeted by the Archbishop because of his agitation in the Land League (Tuam Herald, “Killannin Schism Recalled,” 18 May 1985)

Fr. Coyne decided to take his own case to Rome and travelled to the Holy See to try to gain an audience with the Pope. He would languish there for three years, from 1891 to 1894. Meanwhile, Killanin Church was barred by its parishioners after the Bishop attempted to send a new priest to say Mass. The local blacksmith barred the door and they bound the bell that it might not be rung. A few parishioners went to Mass in neighbouring parishes but many more did not, saying the sin for that assigned itself to the Bishops. Eventually the Bishop of Galway would send a new priest, and in 1893 chose a Fr Conroy who had family ties in the area. He, too, was unable to enter the church. He began “community outreach” efforts by teaching the catechism at local national schools, giving large “book prizes” to good attenders, and eventually saying Mass out of his rented house. The schools included Collinamuck, which, interestingly, is in the parish of Oughterard but its catchment includes pupils from Killanin. He made some headway, being called on to deliver Last Rites and preside over funerals, although attendees might not speak to him. Fr Conroy eventually concluded that it was time to reclaim the church and, taking some of his followers, broke in through a window. Meanwhile, Fr Coyne had gotten no satisfaction in Rome. The Pope stood by the bishops, and the bishops sent letters to the local papers to be read out at Mass. Fr Conroy maintained a police presence at Church. Fr Coyne returned from Rome, and eventually an armed standoff ensued over possession of the church. Although no shots were ever fired, Fr Coyne shoved Fr Conroy and was escorted from the building by the police. (Connacht Tribune, 11 March 1977)

This led to a court case, Coyne vs Tweedy, which actually resulted in establishing law in Ireland regarding the police’s authority in maintaining order at a public gathering. (Birtles, p 588)

More on the Schism can be found at https://www.oughterardheritage.org/content/topics/the-killanin-schism

For further information, the documents referenced above include: