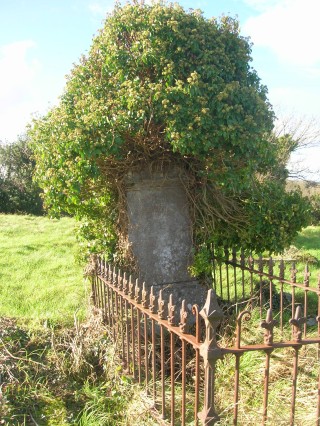 Many of the poor could not afford anything more elaborate than a crude stone or a metal cross to mark their family graves. Those who could afford to erect gravestones did not always do so. Some of the old headstones in the cemetery have not weathered well and are impossible to read. Catherine Cronin has gone to great length to decipher the inscriptions.  She was rewarded when the ivy was removed from an ancient headstone surrounded by an iron railing to the left of the main entrance.

The inscription is: (It is transcribed exactly as it appears on the headstone)

TO THE MEMORY OF

BELOVED BY ALL WHO KNEW HIM

BY HIS SON JOHN MLA QUEENSLAND

Pat Mc Donagh discovered through his research on John Walsh that he was a storekeeper/ railway contractor and investor in Queensland. He was born in 1842 in Co. Galway, Ireland, son of John and Margaret nee Geoghan.  He arrived in Queensland in 1863.

1884 He went to New South Wales where he was listed as a Railway contractor and investor.

He features several times in the Official Records of Debates in the Legislative Assembly,Victoria.

1879 He was elected as an honorary commissioner with others to represent the colony of Queensland at the Sydney International Exhibition in September.

There are many more headstones with a story to tell!

There are several crude stones scattered around the old area of the cemetery. When it came to death some families would travel great distances to have loved ones returned to the family’s traditional burial ground.  In the cemetery there are several people from the neighbouring parish of Killannin buried. When the Workhouse graveyard became over crowded inmates remains were brought to Kilcummin cemetery. The late Dudley Walsh remembered several bodies from the workhouse who were  buried together in a mass grave to the right of the main entrance.

The earliest grave recorded in the cemetery to date dates to 1747.  The vast majority of the graves are of the late 18th century and on wards. The I.H.S. monogram – Jesus Hominium Salvator – Jesus Saviour of Mankind, is found very frequently from the earliest records down to the present day. From the end of the 19th century until the second quarter of the 20th century the Sacred Heart of Jesus is frequently invoked.

The most common invocation on the oldest graves headstones is” O Lord have mercy on the Soul of” or “In loving memory” seems to be used in later times.

There are some very interesting symbolic decorations on the headstones and slabs. Take a closer look the next time you visit the cemetery and if you have an interesting story to tell we would be only too delighted to record it.